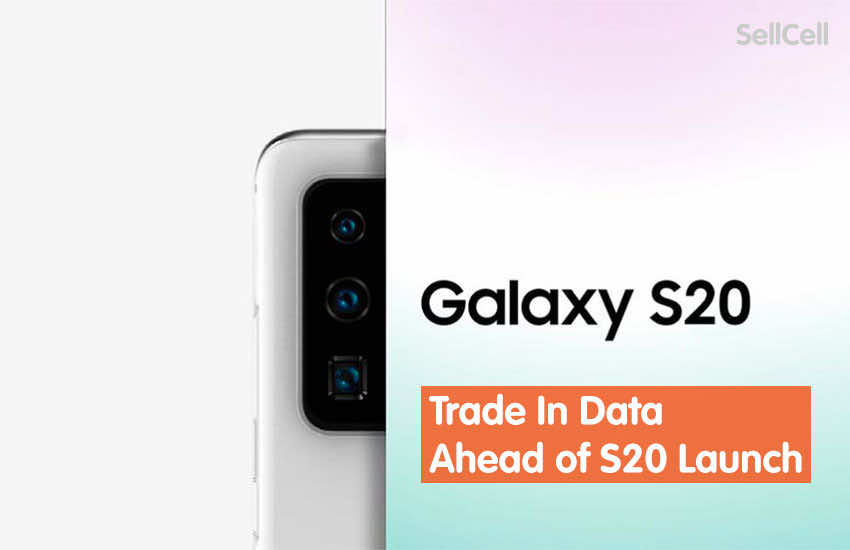 Names aside, the new 2020 phones are expected to be feature packed, with new designs, smart camera advancements including a 48MP telephoto lens and increased battery capacity. There will of course be a 5G version available. It’s looking likely that the prices of the S20 may be a little less, but not far off, than those launched last year. The higher end models on the other hand, like the S20 ultra could be pushing the $2000 mark. For daily updates on the new models read here.

Although the number of units shipped in the last quarter 2019 saw a dip in Samsung sales vs Apple, this is the first time in two years that Apple have outperformed Samsung, largely due to the iPhone 11 success. Samsung is still performing well with 70 million Galaxy phones sold in the last quarter and the previous quarters of 2019 seeing Samsung dominating Global Smartphone Share. This strong performance correlates with our data at SellCell which has seen an increased hike in people searching for a Samsung Phone over the past year.

SellCell.com is the USA’s No. 1 smartphone trade in price comparison site, comparing the prices of over 30 of the main phone buyback companies. We are in an enviable position of pulling in trade-in data across a wide chunk of the phone buyback market and also track the Top 100 most frequently traded in phones in the US. With the Samsung launch just over a week away it’s a great time to look at some of the exciting trade in patterns of existing Samsung owners over the past few weeks. This data will help us to predict if existing Samsung users are looking to upgrade to a new S20 on February 11th.

What is the Most Traded In Samsung Phone in the run up to the Launch?

Are More People Trading In Older Samsung’s ahead of the Feb 11 Launch Compared to Samsung’s Launch Last Year?

How Brand Loyal are Samsung Users?

SellCell recently commissioned a Cell Phone Brand Loyalty Survey where we asked 2000 + US phone users how loyal they were to their existing smartphone brand.

Existing Samsung users were asked when they upgrade if they would be loyal to their brand or be likely to move to another manufacturer.

Again, this strong loyalty in 2019 marks a positive S20 launch for Samsung.

Do Samsung Phones Hold their Value?

Phones have two key periods where they tend to reduce in value, initially on the day that the device is purchased and secondly when a new phone model comes out. The table below shows that the 2019 Samsung models have depreciated by half since launch (51%), faster than Apple’s depreciation at only 35 – 40%. The 2018 Samsung models have depreciated at around 70% from original ticket price again a lot quicker than the iPhone launched the same year at around 50- 60%. Samsung’s don’t appear to hold their value as well as iPhones, so selling the device quickly before a launch is key to get as much as possible to put towards a new upgrade.

Another neat tip to ensure that you get the most from your old device when selling it is to select a buyer that offers you a 30 day price lock. Place the order now for the phone, wait for the new device to be delivered and still enjoy the higher pre-launch trade-in price.

Where Can you look for the Best Deal for Your Old Samsung Phone?

Getting the most cash for your old phone is important, so as the chart below shows it pays to visit SellCell.com. Across all of the top phone models we will guarantee to get you the best price when trading in your old Samsung model.

The Trade In Price Comparison Chart below shows just how much extra cash you can get by using SellCell compared to some of the other main trade in brands. You can literally get hundreds of dollars more to put towards your upgrade.

So in summary, trade-in figures ahead of the Samsung S20 launch are much higher than in the run up to the launch last year amongst existing Samsung owners. As older Samsung models will depreciate quickly post launch, now is the time to get the best value for your existing Samsung phone.

So if you are planning to upgrade to a phone in the S20 range? Take a look at how much you could get for you old phone here: