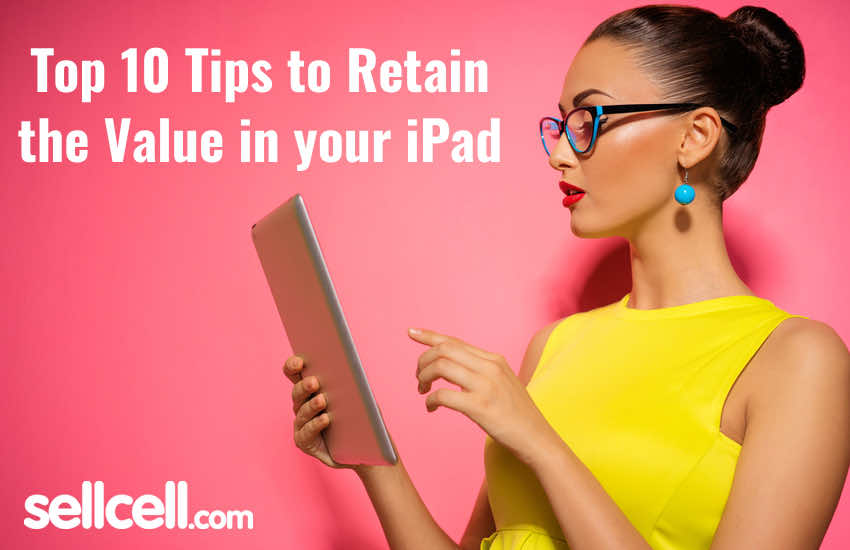 The team at SellCell often see iPads that have been prematurely damaged or need replacement parts within the first year or so of their life, just because they haven’t been used carefully. It’s important to remember that at some point you may want to consider selling your old iPad and it will be worth a lot more money if it has been used properly. If an iPad is in good working order when it is traded in on SellCell.com it will be worth more money than if it has been misused.

We all pick up some bad habits when we use our iPads that we probably don’t even realise that we are doing. To help avoid these unhelpful habits here are some top tips to put in practice to make sure that your iPad will go the distance and sell for maximum value when you look to trade it in!

If you refer to this article the site talks about how once a device has reached it’s 100% charge you should not leave it plugged in as this can cause undue stress to the device and have a negative affect to the battery over the long term. The research actually indicates that lithium batteries don’t need to be charged to 100% and should be removed from the charger. To avoid this happening it’s much healthier for the iPad to be charged throughout the day whilst plugged in, rather than left charging overnight. This is completely contrary to previous advice that battery memory was optimised by long overnight charges rather than short, regular charges.

Studies also do now indicate that you should try not to let your battery regularly drop below the 50% mark. It is now considered to be the best charging practice to let it get to no more than 50% and then charge it up, (but not let it charge up over 100%). if your iPad goes to lower than 50% and then the user plugs it into charge this is not optimal charging and eventually the number of charging cycles that the user will get out of the iPad may reduce, leading it to be replaced at an earlier stage.

We all know the situation of running out of power and grabbing a non genuine lead in the car or at home for that rapid power burst. This over the long term, is not a great thing to do. Not every device charges at the same rate, so it is important to use a charger that has been designed for your iPad. In fact the power that can be applied from the car can eventually cause a little chip called the CHARGE IC to burn out and reduce the devices lifespan

With bigger screens, the increased number of pixels on the screen can really hit the battery and the backlight filter. When we don’t need the screen to be so bright we should turn down our screen background light. This is really simple to do and will be located in the settings dependent on the iPad. Usually the user will be able to drag the brightness toggle down and adjust it accordingly. This will help to reduce overuse of the battery and backlight.

Downloading unused apps can again cause unnecessary power to be used.  Go through your iPad as you would your computer and delete any apps that you no longer need.  Also see in settings which apps are taking up all your space and hence compromising battery life.  Poor performing apps can drain battery life. Try where possible to file apps into folders also to preserve charge.

Believe it or not leaving an iPad out in intense temperatures, which we all do, can critically affect the performance of the device.  In summer months leaving your iPad laying in the sun can cause the battery to swell and in some cases push the screen up cracking it. In extreme cases, the battery can explode. Conversely, in the winter months also leaving an iPad freezing overnight in a car affects the battery performance and general device functionality.  When lithium batteries become too cold it can affect the battery life temporarily as the battery drains quicker – and can again in extreme cases die.

Check if your iPad has a power saving mode. Apple allows the user to apply a Low Power Setting, by going into Settings and then into battery. These options will help to reduce unnecessary battery usage and avoid the battery having to be replaced so quickly. Batteries in some iPads are very difficult to replace, without causing damage to the screen.

Wifi provides much more consistency to the battery rather than using data from a network which can be a lot more stressful for your battery.  You can go the extra mile and turn off mobile data in the settings. This will really reduce an overuse of the device. So where possible always try to use WIFI.

8. Taking your iPad Into the Bathroom

We’ve all done it, read our iPad in the bath, or left it in the bathroom whilst in the shower.  This is a no no, steam and small amounts of water can build up behind the screen and also in the ports. Even the smallest amount can create condensation behind the iPad, which will over time create corrosion and shorten life by leading to water damage.

9. Protect it with a Good Case & Screen Protector

iPads are regularly dropped or thrown on tables, in cars or heavily used by kids. Even if they have no surface cracks a good knock can dislodge important connectors or shock the LCD into a “black mode”.  Having a well fitted heavy duty case and screen protector, will help to maintain the lifespan of your iPad.

Around 1 in 4 people walk around with a cracked screen. Although the device may look to function effectively, outside of the screen this can potentially create a lot more further damage and also reduce the lifespan of the device a lot. A cracked screen enables water to ingress into the device very easily leading to potentially fatal water damage as the build up of corrosion in the device will stop all of the connectors working.

There you have it, some Top Tips that will help you to get the maximum value for your iPad when you sell it.

If you would like to get a valuation for your iPad visit: SellCell.com