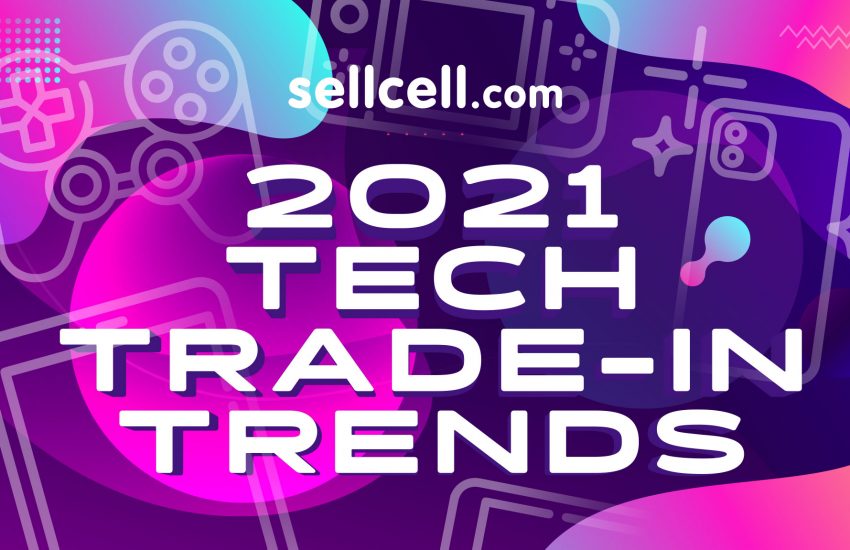 With 2021 all but a distant memory, SellCell takes a look at the most traded-in tech of last year.

If 2021 proved anything, it proved how much of an impact technology has on our lives. Tech is a massive deal, and we have more of it in our lives now than we ever had before. While this is convenient, given technology’s propensity to do everything for us, it does mean we end up with a lot of tech that becomes obsolete.

All of us are guilty of it too; harboring gadgets “just in case,” or out of some sense of loyalty or nostalgia. Fine, if you’re a collector. Not so fine if you’re just keeping tech for the sake of it.

One solution to amassing piles of redundant electronics is to trade-in old tech. This makes sense, as it takes it out of your hands and either puts it to good use in someone else’s, or recycles the parts. So, not only do you get money in the bank, you’re doing the environment a bit of good, too.

And many people did just that, in 2021. Consumers traded tonnes of tech via SellCell, so let’s analyze exactly what devices America was trading in the most last year, when it was traded, and who traded it.

Looking at all the tech traded in during 2021, lets break it down and see exactly what happened with trade-ins last year.

Most Traded-In Smartphone of 2021

As most people will expect, Apple dominates the most traded-in phone figures for 2021. As you can see from the top ten, illustrated above, Apple accounts for 9 of the 10 positions.

The iPhone 11 takes top spot, and the 11 Pro Max took fourth. This is predictable, as people will have been reaching the end of their two-year contracts on these handsets in 2021. Thus, consumers will have traded in their handsets as they prepare to upgrade.

Likewise, it makes sense that we see the iPhone 12 Pro Max in third place. 12-month contracts on the iPhone 12 will have been ending in 2021, and the 12 Pro Max also held its value best, last year. So, when the iPhone 13 launched in limited numbers, canny 12 Pro Max owners knew they had high-value handsets and, as such, traded them in at excellent rates.

Smartphones With Lowest Depreciation in 2021

The following is based on top prices as they were on 31st December, 2021 for a phone in good condition. SellCell has calculated the value based on handsets launched in 2020, to provide an accurate representation of smartphone depreciation during 2021.

Taking the above into consideration, alongside Apple’s supernatural ability to do everything better than everyone else, the iPhone 12 series performed best when it came to depreciation.

As you can see, the 12 Pro Max lost only 31.7% of its value during 2021, since launch; an outstanding feat, especially when we know it not only held value, but it actually clawed back some of the value it had lost.

The Google Pixel 5 also fared pretty well, although losing almost 50% of a smartphone’s value isn’t exactly fantastic, either. Still, it is good enough to give the Pixel 5 fifth spot in the top five smartphones with lowest depreciation, so at least it wasn’t all just Apple pie.

Smartphones With Highest Depreciation in 2021

The following is based on top prices as they were on 31st December, 2021 for a phone in good condition. SellCell has calculated the value based on handsets launched in 2020, to provide an accurate representation of smartphone depreciation during 2021.

Oh dear, Motorola owners. Of the top five smartphones with highest depreciation, your handsets are some of the worst performers out there.

This wall of shame also features two LG handsets; the LG Velvet 5G in third place, and the LG V60 THINQ in fifth place. Hardly a one-up for Motorola, considering LG exited the smartphone market in 2021. Perhaps it is time Motorola owners moved to a better mid-range brand.

Most Traded-In Operating System of 2021

You guessed it, Apple.

Apple devices featuring iOS software accounted for 58% of all smartphones in 2021. Android made up 42% of these figures.

Given the above data regarding depreciation, and 9 of the 10 most traded-in smartphones of 2021, it will surprise absolutely nobody that Apple comes out victorious here.

Again, unsurprisingly, the iPad Pro 12.9 4th Gen was the most traded-in tablet of 2021. Why is that unsurprising? Well, alongside the iPhone 13, Apple also launched two new iPads on September 14th; the iPad 9 and the iPad Mini (2021).

Apple fans have been looking forward to an updated iPad and iPad Mini. So, the likelihood here is they have traded in their trusty iPad Pro to make space for Apple’s latest tablet.

Most Traded-In Gaming Console of 2021

Another foreseeable factor in 2021’s trade-in totals is how Sony’s PlayStation 4 was the console consumers traded in most, beating all generations of Microsoft’s Xbox, and Nintendo’s Switch.

Sony launched the PS5 in November 2020. Despite supply coming nowhere near meeting demand, it seems that PS4 owners were happy to part with their console. The reasons could be twofold, though.

There is the first, more obvious reason; people traded their PS4 in to make way for a new PS5. Perhaps prematurely, in many cases, as consumers struggled to get their hands on Sony’s new flagship.

The second reason, however, is that console owners may have realized that they could get a better trade-in value for their PS4, the earlier they trade it in. Therefore, they were happy to take the cash and wait it out, until they could get hold of a PS5.

As we mentioned, September 14th, now known in historical ledgers as “iPhone 13 Day”, was the biggest trade-in day of 2021.

Apple launched the iPhone 13 series of smartphones to a whirlwind of hype, which sent trade-ins sky-rocketing the second it revealed the 13, as consumers charged to get the best price for their handsets before values plummeted.

December 30th was the second most popular day for trading in tech during 2021. As this is around Christmas, we can assume this is because many people received tech for Christmas, so made a fast buck or two on their old tech.

Greenest City for Tech Recycling in 2021

Of all the 35,000 cities in the entire United States, Orlando, Florida, emerges victorious when it comes to trading tech. This is excellent news, considering Florida is home to some of the most biodiverse ecosystems on the planet, such as the everglades.

The US on a whole sends tonnes of tech to landfill, so it is good to see Orlando is doing its bit and sending more tech than any other city to trade in.

Trade in your tech no matter where in the US you are (and give Orlando something to think about) here!

Women don’t do so well in buying refurbished tech, either. 71% of those who bought refurbished tech in 2021 were male, leaving 29% of refurb tech ending up in the hands of a female.

Let’s get the most satisfying part of this out of the way now; those who blame younger generations for damaging the environment also trade in the least tech.

In seriousness, though, older generations hang on to their tech for longer, and so are naturally going to recycle or trade-in their tech. So it makes sense that those 45 and up account for less trade-ins in 2021.

Aged 44 or above? Trade your tech in here; nobody likes a smug 20-something.

Most Purchased Refurbished Tech of 2021

Consumers didn’t just trade in their tech, they also bought plenty of refurbished goods, too. This is excellent for the environment, as it prevents unwanted tech going to landfill.

Most Purchased Refurbished Smartphone of 2021

Somehow this writer’s text editor didn’t autofill this section. You probably know where we’re going with this… the most purchased, refurbished smartphone was an Apple device.

The iPhone XR, as well as taking the second most-traded-in slot, was also the most purchased refurb in 2021. It makes sense; trade more units of a specific device in, more units are available to buy. Thus, more people buy them as they are inexpensive, given supply is probably outweighing demand.

Most Purchased Refurbished Gaming Console of 2021

The Nintendo Switch was, once again, crowned the best-selling console of 2021 in the US. Therefore, it follows that it would be the most-purchased refurb console of 2021.

Despite PS4 becoming the most traded-in console in 2021, it would seem people haven’t opted to buy refurbished Sony consoles, instead opting for Nintendo’s immeasurably fun Switch console.

So, 2021 in summary. Apple, as we all knew, has dominated the trade-in figures in a very positive light. Motorola, by contrast, not so much. PlayStation and Nintendo Switch enjoyed healthy trade-in stats. Those aged 25-34 trade in more tech than any other age group (more than those aged anything over 44 and above). And females really need to trade in more tech.

If you want to be a part of 2022’s tech trade-in drive, and get some cash in your pocket while you save the planet from climate extinction, perhaps you could trade your devices in this year. Assuming you don’t already, of course. If you do trade your tech, keep up the good work!

The next step, if you don’t trade your tech, is finding out how much your devices are worth. You can compare prices of countless smartphones, smartwatches, tablets, games consoles, and other tech, at SellCell.com. With over 45 trusted buyback vendors and a best price guarantee backing your transaction, let SellCell take all the hard work out of trading in your technology. You never know, you might be sitting on a goldmine!

SellCell analyzed trade-in figures across all of the tech traded-in via its website in 2021. This allowed SellCell to determine a wide range of factors, including: most traded in devices across tech; depreciation in tech value; and gender, location, and ages of those who traded in tech in 2021. The data was used to produce this report and no personal data of those who traded devices were retained or stored.