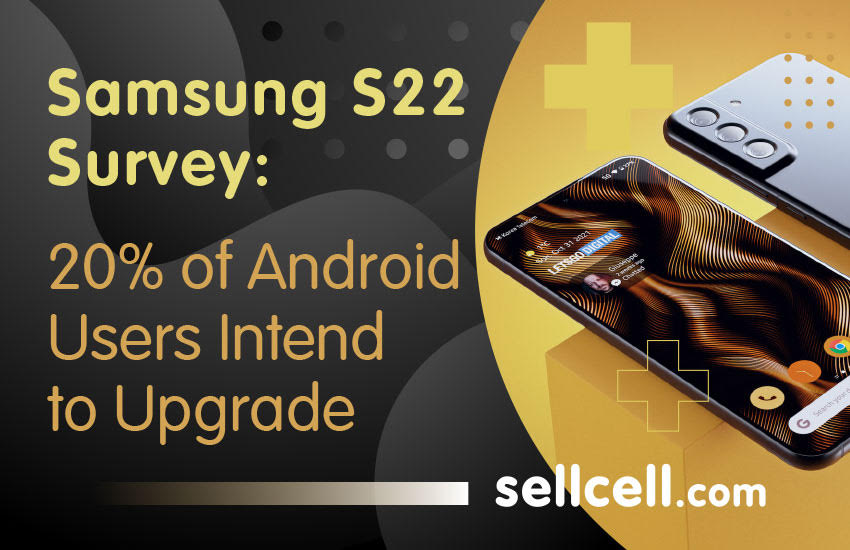 – Of almost 11,000 US Android owners, 20% will upgrade to the S22 in February
– The high-end S22 Ultra is the most sought-after model from Samsung’s forthcoming range
– The most traded-in Android model in the past two weeks is the Samsung S21 Ultra 5G

Samsung released its Galaxy S21 range back in February 2021, amidst a global health crisis and worldwide electronic component shortage. It was around the same time that Apple overtook Samsung as the best-selling smartphone brand in the world. Samsung, it seemed, had fallen foul of the havoc that 2021 wrought across the entire tech industry.

However, it would appear that all was not lost in the war with Apple. SellCell has carried out a survey of upgrade intention among Android users, discovering that the S22 might be the smartphone that puts Samsung back at the zenith point of smartphone sales. A tentative might, but it could happen if the survey results are anything to go by; Samsung may upset the Apple cart yet. Samsung is due to release its new range of smartphones on February 9th.

SellCell has surveyed almost 11,000 US Android users to determine upgrade intention. It has then compared this data with inside trade-in data to show correlations between the two data sets. Let’s see what Android owners make of the forthcoming S22 smartphone range.

The survey results paint several pictures, and not just about Samsung, as the key findings above illustrate. Here’s how respondents answered the survey questions.

1. Will You Be Upgrading to a Samsung Galaxy S22?

Don’t let the chart above fool you. Even though 80% of the 10, 678 people surveyed said they won’t upgrade to a Samsung Galaxy S22, that leaves 20% who said they will. This 20% is not to be taken lightly, as it is represents a large percentage when you consider the vast number of different smartphone models on the market.

Think about it from the perspective of another brand. Particularly Apple, as it will see these figures as a loss in terms of converts to the Apple ecosystem. This is 20% of Android users that Apple has failed to convert. It does, however, correlate with a survey SellCell conducted in 2021, which showed a 15% drop in Android users’ intent to jump ship and upgrade to an iPhone, compared to data from 2020. Perhaps Android users are sticking to what they know, especially with the S22 on the horizon.

Upgrading to an S22? See how much your phone is worth at SellCell

2. If You Are Upgrading to an S22, Which Model Will You Be Upgrading To?

SellCell then asked the 20% (or 2139) of the respondents upgrading to an S22, which model they would select.

As you can see, almost half of respondents (44.4%) to question 2 stated they would opt for a Galaxy S22 Ultra. For some, this might seem surprising. The Ultra is the most expensive, after all, with SellCell giving respondents a guide price of $1,299 for this model. Still, intent is high for the premium pick.

The standard S22, comes second place, with 30.1% of the upgraders’ votes. This is the least expensive model, with a guide price of $899. The S22+ fares worst, with only 25.5% of S22 upgraders plumping for the mid-range of the three handsets.

3. Gender of Survey Respondents Who Will Upgrade to an S22

Despite studies showing that it is women who show the most purchase intent when it comes to tech (especially laptops and smartphones), it is males who dominate the S22 upgrade figures, with almost a two thirds of those upgrading to an S22 being male.

NB: Of the 2139 Samsung upgraders, 30 were unknown gender, and so the total number of responders to this survey question is 2109.

4. Age of Survey Respondents Who Will Upgrade to an S22

Most Popular Android Models Traded In

During the period 01/10/2022-01/23/2022, it is clear to see from the above data that Samsung has dominated Android trade-ins. In fact, no other brand has proven as popular as Samsung during this trade-in period.

The Galaxy S21 Ultra 5G tops the list when it comes to the 10 most popular Android models that consumers traded in during this period.

Maybe disquietingly for Samsung, the Z Fold3 and Z Flip3 appear on this list, too. Not a brilliant look, considering both handsets only launched in August 2021.

What Do These Survey Results Tell Us

Will the Galaxy S22 Prove Itself a Samsung Success?

Strong S22 upgrade intentions of 20% across all Android models, coupled with equally strong secondary market figures from SellCell’s internal data, tells us that the S22 could prove incredibly popular and, yes, is likely to prove a success for Samsung.

Trade-in data is very telling, and given that SellCell has seen consumers flocking to trade in their Samsung devices with one of its 45 trusted buyback vendors, 2022 could well be a significantly better year for Samsung than 2021.

If you’d like to check the price of your smartphone, you can do so now via SellCell, and see whether you’re sitting on a veritable goldmine in the form of an unused handset. If you decide to trade-in, do so before the S22 launches, as your handset’s price will drop.

With a pre-launch price lock-in available with many of SellCell’s buyback vendors, and backed by a best price guarantee, you’ll get the best value for your Samsung smartphone, ready to offset against the cost of the S22, when it arrives.

See how much your Samsung smartphone is worth, here

SellCell surveyed 10,678 Android users, to ask their thoughts around upgrading to a Samsung S22. A leading independent survey platform gathered survey data amongst US adults between the ages of 18-65+, with an equal split of male and female respondents. It took no personal identification, therefore, nor did it store any.
SellCell also used its own internal trade in data to identify trade-in trends and patterns ahead of the February 8th Galaxy S22 launch.