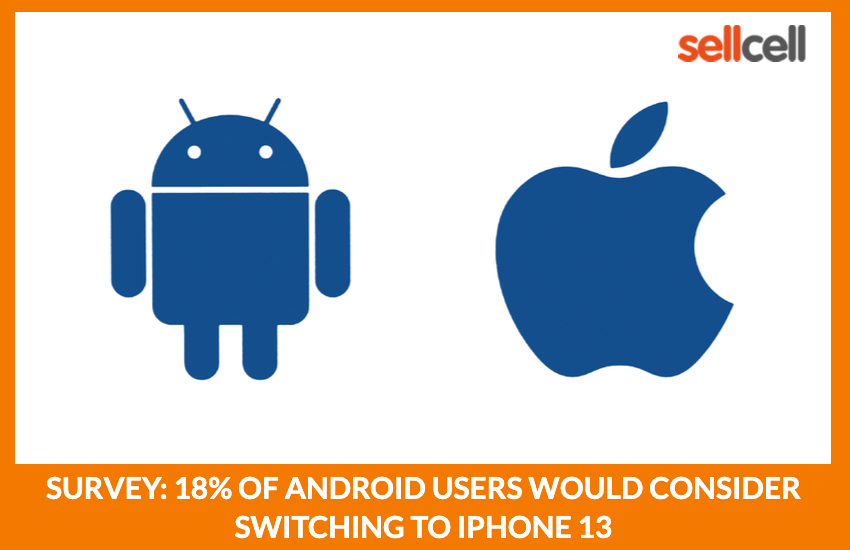 Missing Touch ID and the controversial new photo scanning feature are among the top reasons why Android users are put off switching to the upcoming iPhone.

With several new additions – including 120Hz display, always-on display, faster A15 processor, and more storage, the much-anticipated iPhone 13 is shaping up to be an impressive upgrade over last year’s lineup.

In a recent SellCell survey, a whopping 44% of current iPhone users revealed they intend to upgrade to a next-gen iPhone model after it is released.

With a potential launch around the corner, we ran a follow-up purchase intent survey to find out what percentage of Android users would consider switching to the iPhone 13, the reasons why they would or wouldn’t make the switch, and more.

Note: The survey included more than 5000 Android users, aged 18 years or older, based in the US.

15% decline in purchase intent for newer iPhones from 2020

We asked respondents with an Android phone whether they would consider buying the upcoming iPhone 13 after it is released and found out:

As a follow-up question, we asked the potential buyers (respondents who answered ‘yes’ to whether they would consider the switch) which of the four iPhone 13 models they would choose when they upgrade, and here are the results:

We further asked the potential switchers to pick the main reason why they would replace their current Android phone with an iPhone 13, and the responses – in order of the votes received – were:

When the remaining Android users (respondents who said ‘no’ when asked whether they would consider switching) were asked about the reason why they don’t intend to switch away, the responses – in order of the votes received – were:

Nearly one-third (31.9%) cited ‘lack of fingerprint scanner‘ as the primary reason for not switching to iPhone 13. Fingerprint scanners, a staple feature of most Android devices, are still nowhere to be found in recent iPhones, and while Apple’s alternative Face ID is just as quick and secure, it has proven to be less effective while wearing face masks.

But, for about two-in-10 (16.7%) Android loyalists, the biggest concern is that ‘iOS offers very little customizability.’ With the introduction of widgets and custom app icons in iOS 14, iPhones sure have come a long way in this regard but still lack several customization options – including support for interactive widgets and launchers – to reach parity with their Android counterparts.

iOS’s lack of support for sideloading apps is the deal-breaker for about 13% of Android users who don’t intend to switch to iPhone 13. Unlike Android, iOS devices, unless jailbroken, do not allow users to install apps downloaded from the web or third-party marketplaces due to security concerns.

Interestingly, more than one-in-10 (10.4%) users noted the upcoming ‘intrusive iCloud photo scanning‘ feature as the main reason for not making the jump. To curb the spread of child abuse images, Apple is set to introduce a new scanning feature that will check whether the hashes of pictures you upload to iCloud match with a database of known child sexual abuse material or CSAM hashes. This iOS 15 feature, however, has received more criticism than praise and has many privacy experts and users worried about possible privacy implications and the likelihood of it being exploited for other types of content.

4.5% cited ‘iPhones are expensive‘ as the reason for not considering the iPhone 13, while another about 4% said they would prefer switching to an older iPhone model.

Whereas 2.6% would not switch because they prefer Google Assistant over Apple’s Siri, slightly smaller shares of 2.3% and 1.5% are put off by iOS’s lack of support for split-screen multitasking and multiple user profiles, respectively.

The least popular reasons for not making the switch are ‘no foldable iPhone options’ (0.8%) and ‘missing app lock feature’ (0.5%).

Interests in other upcoming Apple releases

As well as the iPhone 13 range, Apple could launch at least two other products, including a new smartwatch and a new AirPods, at the September event.

The upcoming smartwatch — presumably called the Apple Watch Series 7 — could feature a new flat-edge design, a bigger battery, and an additional optical sensor to monitor blood glucose levels, among other things.

With the new Apple Watch Series 7 and AirPods 3 expected to go official alongside the iPhone 13, we asked the same set of potential Android-to-iPhone switchers (respondents who are considering moving to iPhone 13) whether they would be interested in buying any of them if the rumors are true, and we found out:

According to the survey, 18.3% of Android users would consider switching to the upcoming iPhone 13 after it is released.

In other words, fewer Android users are looking to replace their current smartphone with a new iPhone compared to last year (18.3% down from 33.1%).

Meanwhile, ‘lack of fingerprint scanner on iPhones’ (31.9%), ‘limited customizability in iOS’ (16.7%), ‘sideloading restrictions in iOS’ (12.8%), ‘Android phones have better hardware than iPhones’ (12.1%), and ‘intrusive iCloud photo scanning’ (10.4%) are among the biggest reasons why Android users would not switch to iPhone 13.

Recent controversies around potential privacy and misuse concerns associated with iCloud picture scanning may have been the factor most responsible for the decline in purchase intention, as other significant factors above have barely changed or haven’t changed at all since the last survey.

The motive of the survey was to find out what percentage of Android users would consider switching to the upcoming iPhone 13, the reasons why they would or wouldn’t make the switch, and more.