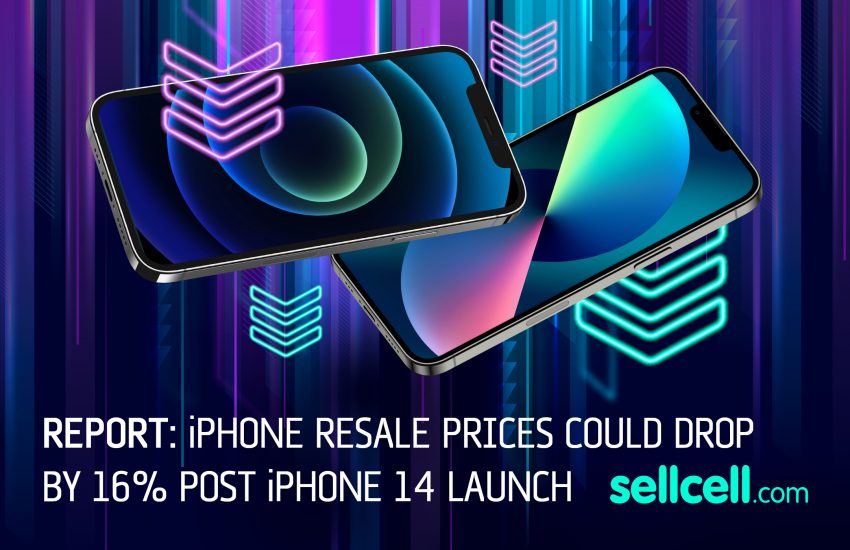 By now, we all know that new smartphones (or any tech, for that matter) lose a lot of their value literally the day after launch. We can say the same for the generation of smartphone before, which always loses a heap of value once the brand announces its successor, and even more so when the newest iteration hits the shelves.

The same can generally be said for iPhone. While recent handsets have exhibited somewhat strange behaviour—in some cases recovering a small percentage of that lost value—value depreciation trends over the years show that Apple’s baby isn’t immune to the market effects felt by every other smartphone brand. While it may retain the most value compared to any other handset, iPhone sees value depreciation too, especially when Apple announces a new generation.

SellCell has analysed iPhone 11 and 12 value data from June 1st 2021-December 1st 2021, concentrating in particular on the month of the iPhone 13 announcement; September 2021. By scrutinizing these statistics, it becomes clear what is likely to happen to the iPhone 13 value when Apple announces the 14-series in September 2022. Basically, if an iPhone owner is thinking of trading their iPhone in, they shouldn’t hang about, or it’ll lose more value in the wake of the iPhone 14 launch.

NB: for the purpose of this report, SellCell analysed sales data for handsets in “like new” condition. Trends are similar for phones in “good” condition.

Trends show that those currently sitting on an iPhone waiting to trade it in should do so with caution, particularly as we approach the launch of the iPhone 14.

As the above table illustrates, even premium iPhones aren’t safe from the slippery slope September brings. Apple consistently announces its new handsets around September, and SellCell’s data above shows even the 12 Pro Max (512GB) lost $220 in value during September.

In fact, looking through values for every iPhone 11 and iPhone 12 model paints a similar picture. While not all iPhone models lost the same percentage value, every one of them saw depreciation during September.

This will have likely taken many iPhone owners by surprise… or at least those looking to trade their iPhone in pre-iPhone 13. Having seen some recovery of lost value during July 2021, iPhone owners may well have been lulled into a false sense of security, only to find the value of their handset has plummeted once the iPhone 13 was common knowledge.

We see that same minor uptick in November, with certain models like the iPhone 12 Mini 128GB and 12 Pro Max 128GB recovering $39 and $46, respectively. However, take this with a pinch of salt, given the overall loss between September 1st and December 1st, 2021, across the board.

The graph above illustrates this value loss perfectly. As you can see, SellCell’s value data shows a marked drop in value (on average 11.9%, or $122.17 in cash terms). The graph also illustrates the iPhone for the strange beast that it is, as all iPhone-12 models saw a minor recuperation in value just before October 2021.

Why is this? Well, as we know, the iPhone 13 release was fraught with setbacks on the back of 2021’s COVID lockdown. Combine this with the subsequent component shortages and logistics delays, and we see Apple admitting it couldn’t meet demand with a supply of freshly baked iPhone 13s. The result? Demand for the iPhone 12 went up again, meaning so did its value compared to its original MSRP.

Plus, this was just before Christmas, when phone values have a tendency to increase with demand rising as people flock to buy Christmas presents.

Again, though, we see some models recovering value in those last few days of September, much like the 12-series. However, while all iPhone 12 models saw some minor value recovery, only the iPhone 11 Pro 512GB, Pro 256GB, Pro 64GB, 11 128GB, and 11 64GB saw any recovery in value at the end of September. The iPhone 11 128GB actually continued to recover value until December 1st.

Again, though, SellCell stresses that this small recovery is far outweighed by the overall loss. Don’t expect to trade your iPhone 12 in for the original MSRP, or anywhere near it. If you want to sell your iPhone and get the iPhone 14, do it sooner rather than later to avoid that loss.

In terms of percentage value, we can see where the damage lies after just a month. The iPhone Pro Max 512GB, for example, loses a further 15.7% of its value between September 1st and October 1st. Likewise, the 256GB version loses a further 14.2% of its remaining value in the same timeframe. These are Apple’s flagship products, and owners won’t have taken lightly to the value of their smartphone plummeting like this.

The iPhone 11-series behaved somewhat erratically, though, once we look through the months of September and October. As you can see, between September 1st and October 1st, 2021, models in this series lost between 4.8%-14.1% of their value.

These trends are the same if we look at handsets in “good” condition.

Given the above trends, SellCell can recommend what your next course of action should be if you are considering trading your iPhone in.

The main takeaway is that iPhone owners should get a value sooner rather than later. iPhone value will plummet the closer we get to the iPhone 14 launch in September. Once Apple has conducted its annual September unveiling, previous generation iPhone value will drop even further.

Using a trade-in price comparison service like SellCell means that iPhone owners can see the value of their handset across a range of buyback vendors. All the vendors on SellCell will allow customers to lock a price in. If iPhone owners can find a vendor to whom they can sell an iPhone 13, and lock the price for up to 28 – 30 days , they might just be able to beat that sudden price plummet halfway into September, which SellCell predicts will happen in 2022 just as it did in 2021 with the iPhone 12 and 11.

At this stage, it is difficult to say how the iPhone 13 (and models before it) will perform when Apple unveils the iPhone 14. However, looking at past trends with Apple, SellCell has identified the point at which an iPhone will lose even more of its value, so owners can avoid that value drop if they trade in shrewdly, and don’t hang fire for too long.

With purchase intent for the iPhone 14 not as dazzling as some may expect, perhaps the iPhone 13 series will remain buoyant and buck the trend we’ve seen in 2021.