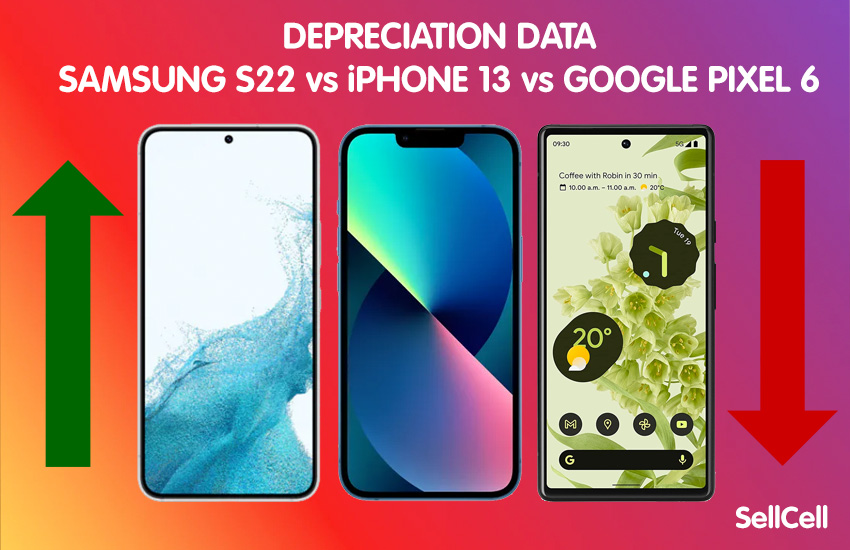 It is no secret that the iPhone holds its value better than any other smartphone on the market; SellCell’s recent research into iPhone value retention illustrated just that. However, what about other smartphones?

If you buy a flagship from the likes of Samsung or Google, you’re looking at investing around the same amount of cash as you would an iPhone. With this in mind, if you buy a Samsung Galaxy S22—the brand’s latest model—for example, then you’d expect it to still be worth a significant portion of what you paid, right? Wrong.

Unlike those who shrewdly buy an iPhone—with all the value retention that brings alongside a fantastic product—those who invest in Android alternatives like a Samsung or Google handset can find themselves significantly short-changed.

Using internal smartphone value data, SellCell has analysed depreciation values (since launch) of Apple, Samsung, and Google’s flagship handsets. It has considered the trade-in value of all lines in each range (iPhone 13, Samsung Galaxy S22, and Google Pixel 6) based on the resale value of phones in “like new” and “good” condition. SellCell collected the data across months one and two since launch, to compare depreciation, and to see which brands hold their value. SellCell is the US’ No.1 price comparison site for selling phones, so constantly monitors the value of these handsets across 40+ independent buyers.

Let’s see what the data has to say…

SellCell reviewed internal smartphone value data across iPhone 13, Galaxy S22, and Pixel 6 ranges. Above, you can see the data for all models within those ranges.

As the above chart illustrates (for smartphones in like new condition), the Galaxy S22 range has lost the most value since launch, however, all is not lost for Samsung’s flagship range. It may have lost 46.8% of its value by the end of month one, but that figure hasn’t changed during month two. If S22 depreciation has plateaued in this way, then perhaps Samsung might see some value recovery moving forward.

At least, this is plausible when we look at the results for the iPhone 13 and (surprisingly) the Pixel 6 ranges. Both of these have shown a recovery in value vs. that initial loss in month one. SellCell stated this would happen with the iPhone 13 back in July ’21, and its prediction is ringing true. Not only does the iPhone hold its value better than any other smartphone, and more of it, but it actually recovers some of that initial value loss.

Perhaps unforeseen is the value recovery the Pixel 6 range is witnessing. Without casting aspersions on the worthiness of the Pixel 6 itself, it is promising news for Google after a launch that was—predictably—fraught with issues.

The story is the same when we look at depreciation of phones in good condition. The S22 has plateaued, while the Pixel 6 and the iPhone 13 ranges have both seen value recovery. But if we dive deeper still, how do the results look then? All is not as rosy as it might seem.

As with the averages illustrated earlier, the S22 value has plateaued between month one end and month two end, following a drastic drop in value which sees some Galaxy S22 models losing over 50% of their value in like new condition.

The Google Pixel may have only seen value recovery of 0.2% for the 6 Pro 128GB, but it has clawed back a respectable 4.1% of its value with the standard Pixel 6 128GB between the end of month one and the end of month two. This is behaviour normally reserved only for iPhone, historically, so perhaps Google’s handsets are buoyed by increased demand now the dust has settled on the Pixel 6 launch.

Looking at the figures for phones in “good condition”, we mainly see the same patterns, aside from the Pixel 6 Pro levelling out rather than regaining some of the initial loss, and the standard Pixel 6 recovering 5.8% of its value between the end of month one and the end of month two.

iPhone Keeps Its Crown (and Its Value)

As we already knew, the iPhone is champion when it comes to value retention, seemingly dodging the knockout blows to value that initially felled the Galaxy S22 and Pixel 6 ranges. However, with an uptick in value for the Pixel 6, and a plateauing of value for the Galaxy S22, we may well see both flagship smartphone ranges recovering value in much the same way as the iPhone 13 has (again). Want to see for youself? You can see the prices to sell an iPhone yourself and view just how much value the devices retain!

SellCell analysed sales data for iPhone 13, Samsung Galaxy S22, and Google Pixel 6 smartphone ranges, considering the trade-in value of all models from each respective range, in “good” and “like new” condition, to determine the value depreciation of the handsets in months 1 and 2 since launch.