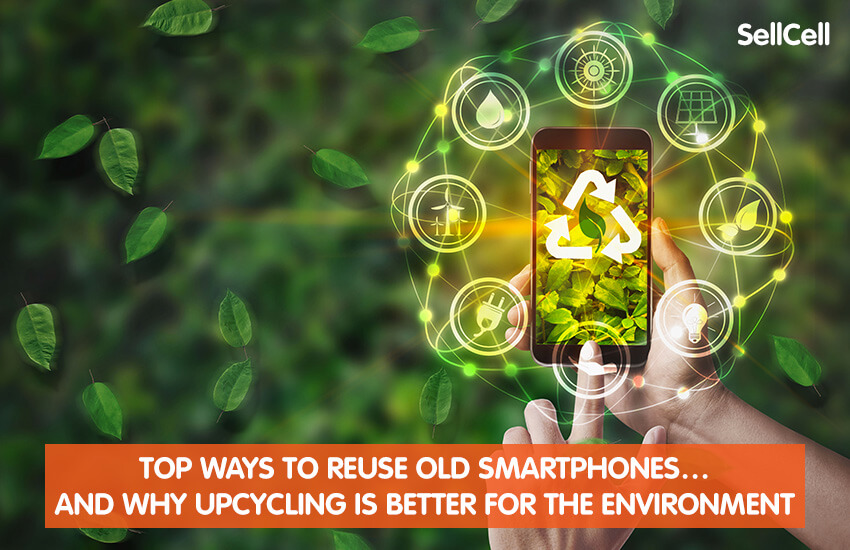 There are so many things you can use an old smartphone for which are more environmentally conscious than tossing it in the trash.

Phones nowadays are useful for so much more than just making calls. Since the advent of the smartphone, we have been using these devices to run our lives. They do everything, from recording our favorite moments via the camera, reminding us it is a relative’s birthday from the calendar, and even helping us achieve calm with meditation apps.

So, when you think about it, throwing your handset away when you think you no longer need it could be a foolhardy option to take. Especially when there is so much you can still do with it. Let’s take a look at the best ways to reuse your old smartphone, and why it is a more environmentally sound choice.

The Best Ways to Reuse Your Old Smartphone

As we say, there are so many ways to reuse an old smartphone. Cellphone recycling is easy and much better for the environment. Here’s some of the top ways you can put that old smartphone back to good use.

1. Use Your Old Smartphone as a Sat Nav

Dedicated sat navs (satellite navigation systems) have fallen out of favor and smartphones have become the best way to find your way around, thanks to the likes of Google Maps. But using your phone as a sat nav can have consequences for your battery, as it is a juice-guzzling smartphone feature.

If you’ve got an old smartphone, though, you can always repurpose it as a sat nav. That way, your new handset is free to do everything else, keeping its battery levels stocked up. You can disable a lot of the other functions of your old smartphone, so it can work solely as a route finder. You could even mount it in the car permanently.

2. Use Your Smartphone as a Camera

Most phones these days come with a camera. A lot of them have high-quality cameras. Some even have cameras that are better than some actual cameras. Here, throwing your old phone away, when you could take the next Photograph of the Year with it, would be a mistake.

If you have a great camera on your phone, this means your new phone doesn’t need a brilliant camera too. Just pack both in your bag when you know you’ll need to record a few memories, and you’ll find you’ve got a perfectly functioning camera, with a new handset that cost you less.

3. Use Your Smartphone as a Music Player

It didn’t take mobile phone manufacturers that long to realize that a phone could also double up to play music. Modern smartphones offer a massive range of options for music players. You can connect them to Spotify, Tidal, and even Plex, which means you can play music from your own collection.

So, if you have an old phone lying around, don’t bin it. Use it as a dedicated music device instead. Kind of like an iPod, except you can do a bit more with it should you wish. Just plug it into your speakers, or connect via Bluetooth, and you can listen to your heart’s content, while your new phone is free for calls.

Now your friends won’t interrupt your music; you can talk and listen at the same time!

4. Gift Your Old Smartphone to Someone

Why throw a perfectly functional smartphone away when you could give it to someone else? If you’ve got children in the family, this could be the perfect first smartphone for them. It doesn’t matter if they damage it too much, as they’ve spent no money on it. It won’t matter to you as you were about to toss it in the bin (which you should NEVER do).

Likewise, if an older relative is still using some woefully slow phone with a physical keypad, why not try to drag them into the present and introduce them to smartphones? Your old handset could be just the thing they need to video call relatives or receive pictures of the grandkids.

5. Use Your Smartphone as a Wireless Router

If your old phone is fairly modern and can connect to 4G or even 5G cellular data networks, then instead of throwing it away, you could use your phone to cut a few cables and ditch your expensive internet service provider. Instead, connecting to the cellular data network for your needs.

This comes with a few caveats, though. First, you’ll to get a cellular data sim card plan which features unlimited data, or you’ll find you can’t connect to the internet if you have a data cap. You should also take note of the carrier’s fair usage terms, as it might throttle your connection if you’re hammering too much data.

This is a growingly popular method of both accessing the internet without a traditional ISP, and of recycling your handset. Even Samsung is expanding its Galaxy Upcycling program, which enables Galaxy smartphone owners to repurpose their device as a smart home device.

6. Sell Your Old Smartphone for Cash

If none of the above appeal to you, then surely making some cold, hard cash will. Instead of wasting a perfectly good phone by consigning it to the dustbin of old useless tech, sell it! Using a comparison service like SellCell to sell your old phone means somebody else will use the phone, instead of it decaying in landfill and leaking heavy metals into the surrounding environment.

If you sell your phone online with SellCell, then not only are you doing the environment a favor, you’re going to put a smile on your wallet’s face, too. This is because you will always get the best deal for your handset by using a comparison service like SellCell. You’ll often have the cash in the bank within a day or two, as well!

Trading your phone in is by far a better way to repurpose it than simply throwing it out or leaving it at the back of a drawer. If you trade in via SellCell, then you can also buy a refurbished handset at the same time, saving even more cash and doing a good turn for Mother Earth in the process.

Why Is Recycling Your Phone Better for the Environment?

It probably doesn’t need spelling out that throwing something away rather than recycling it is bad for the environment, but in what ways can trashing your old phone cause damage? Here’s just a few.

1. eWaste Is Literally a Growing Problem

Did you know that, according to the International Telecommunication Union, the US alone accounts for 13.1 megatons (or roughly 14,000 large elephants, if you want a real world example) of electronic waste per year? Well, it does, and if you don’t dispose of your phone or other unwanted tech properly, then you are part of the issue.

Mineral mining is a subject that most mobile phone manufacturers notoriously skirt around. Why? Well, it is terrible for the environment, for a start. Mining not only damages ecosystems; the materials being mined are often toxic themselves. Even if they aren’t, the run-off from mining these minerals can be toxic, which can then leach into the surrounding air, soil, and water.

Aside from the environmental impact, we have the societal impact. Take the mining of tantalum in the Congo as an example. The workers here are subject to appalling conditions which verge on human rights atrocities.

So, recycling your phone is the only choice if you want to play your part in ending these nefarious practices.

It goes without saying that recycling your old phone will conserve energy when compared to throwing it away and buying a new handset. Think about it. If you buy a refurbished phone, then it doesn’t need manufacturing; it already exists and has been owned by someone else.

The amount of raw materials and eWaste produced when manufacturing mobile phones is phenomenal. From the run-off when mining for the mineral parts, to the tiny bits of copper and soldering lead that don’t make it inside your handset. It all piles up.

That is all without mentioning the impact of shipping the devices at the end of the manufacturing process, with transport also damaging the environment.

Aside from the fact that you can save (or even make) yourself some money, you can also save the environment by recycling your handset with a company interested in its internal components as opposed to reselling it. These components include copper, tantalum, and even gold, so it makes sense that some companies would want to reuse these parts, phone manufacturers included.

Therefore, it is better for the environment because companies will reuse these parts instead of mining for them. This obviously reduces environmental impact, as per the previous points we’ve made here.

Repurpose Your Old Smartphone Before It’s Too Late

As you can see, recycling your old phone is really easy. Even if you can’t think of a use for your old handset, you can always get rid of it and make some cash if you sell your phone with a company like SellCell. One thing you should never do, is throw your old handset in the trash (seriously, DO NOT DO THIS).

Do this, and you are adding to the masses of electronic waste that we appear to be stockpiling. However, it is also on the manufacturers of these devices to come up with alternative manufacturing methods, in order to lessen environmental impact and ensure that our thirst for technology doesn’t come at the expense of the planet.