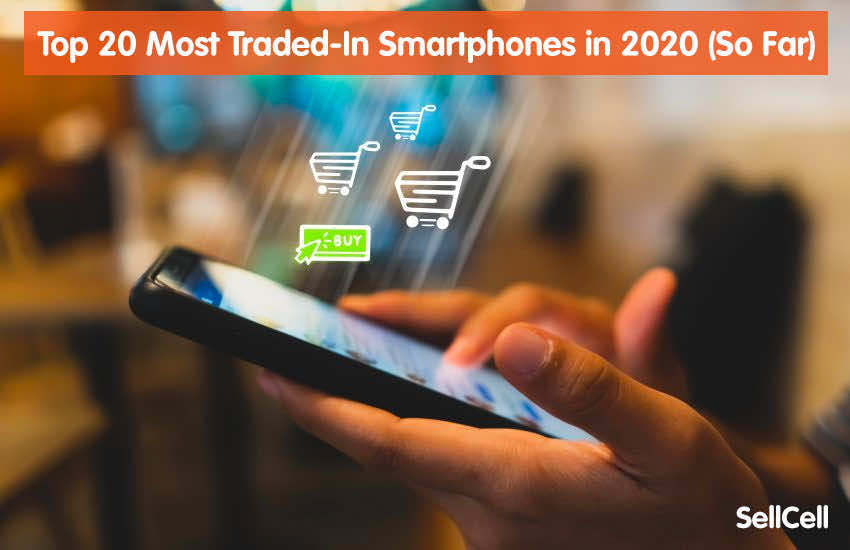 Trading in your old handset is one of the best ways to save money on the latest smartphone. Here, we look at the most traded-in handsets of the past six months.

We may only be halfway through 2020 but, already, consumers have been trading their smartphones in at a rate of knots. The reasons for trading in old handsets are myriad. Financial hardship relating to the COVID-19 pandemic may have forced your hand. Perhaps you wanted to get hold of the latest flagship on release day but didn’t quite have the funds. Maybe you just wanted to switch from iOS to Android.

Whatever the reason for trade-in, you can’t deny that the markets for selling your smartphone and buying refurbished handsets have been strong over the past six months. Looking at the figures since January, though, there is a trend emerging. Let’s take a look at what these stats are telling us.

The Biggest Bite of the Apple

Looking at our data, the most traded-in smartphones (so far this year) come from only two manufacturers. The first and perhaps the least surprising is Apple’s iPhone. The iPhone dominates the smartphone market. During every quarter in 2019, the iPhone reigned supreme. It never dropped below a 39% market share in the US (source: Counterpoint Research).

The first quarter of 2020 sees Apple in a similarly strong position. A 46% market share is not something to be complaining about, particularly with the wealth of other smartphones available. This market share tells us that most smartphone users in the US have an iPhone. Therefore, it should not be much of a surprise to learn that they are also the most traded-in phones of 2020, up to now.

Our figures show that of the top 20 most traded-in mobile phones so far this year, 13 of them are Apple handsets. There are a number of dominant reasons why Apple phones are traded-in so frequently. We’ll come to the whys and wherefores shortly, but first let’s take a look at the other manufacturer in our list.

The Android Side of the Story

The second most traded-in brand is Samsung’s “Galaxy” line. In fact, there are no other manufacturers on the list aside from Apple and Samsung. Again, we’ll come to the reasons for this shortly. But if we take a look back at the market share stats (source: Counterpoint Research) we’ll see that Samsung is the most popular brand after Apple.

Samsung’s position as the second-most popular smartphone brand hasn’t been threatened in the past 15 months. It is the most popular Android smartphone manufacturer, way ahead of the likes of LG, Lenovo, and others. Again, like Apple, the first quarter of 2020 has proven to be a strong one for Samsung, as they enjoyed a 32% share of the US smartphone market.

So, if Apple has 14 of the 20 most traded-in handsets, according to our data, then some very simple math tells us that Samsung has 6. There are a few surprises in there as to what handsets are being traded-in, so let’s dig down into some figures.

Of the top 20 most traded-in phones of 2020 so far, the handset that sits firmly at the top of the table is the iPhone 7. This workhorse saw release back in 2016 so, for four years, consumers have remained faithful to the iPhone 7. 2020 has been a year of challenges so far. With so many people working from home, upgrades have been prevalent as people bring their phone tech up to scratch. If the iPhone 7 hasn’t been performing as people try to use it for work, then a trade-in makes sense.

A little further down the list, at position number five, is the Samsung Galaxy S10+. This phone only arrived in March 2019, so why are people trading this phone in so soon? Probably because of the Galaxy S20. It saw release in March of this year, just before the close of the first quarter. Many consumers like to have the very latest in smartphone tech. So, this year has seen the flagship S10+ dropped in favor of newer models.

So, are any other surprises present in the data? Well, one handset that stands out like the proverbial sore thumb is the iPhone 11 Pro Max. The handset entered the US’ public domain in September 2020. That makes it the newest smartphone on the list. 2020 will have been a struggle for many, particularly from a financial viewpoint. So, it makes sense, then, that consumers will be trading in high-value handsets to make some extra cash.

Several older smartphones, such as the iPhone 6, 6 Plus, and the Samsung Galaxy S8, have made the list, too. Again, more people from ever before have been working from home or under lockdown restrictions. People may have traded their phones in to upgrade for work or for financial reasons, as mentioned already. However, people will also have used their time to take stock of what is around them. Decluttering will have therefore undoubtedly played a large part in the selling of older models.

Why the iPhone and Galaxy?

Back in January 2020, PC Mag reported on a Wave 7 Research project relating to the iPhone/Samsung smartphone duopoly. As PC Mag says, it isn’t a new phenomenon, but the fact that their market dominance continues remains fairly startling. The fact of the matter is, if so many smartphone consumers have a very limited choice in terms of their handsets, then it will be these choices that rear their heads when the time comes to trade a handset in.

If 90% of the handsets stocked by carriers are either Samsung or Apple, then it makes sense that it will be handsets from these two brands that will be traded-in most. There simply aren’t enough other brands to make a dent in the smartphone trade-in market. Consumers who are seeking a new smartphone but don’t want to be forced into choosing from only two manufacturers have to look outside of their carrier’s stock and at unlocked handsets.

This practice is pretty much unheard of in the US. Buying unlocked smartphones direct from the manufacturer is also rarely a consideration. Perhaps a shake-up of the market is needed, with more variety being introduced. If vendors continue to offer a limited choice with most handsets represented by only two brands, then it is unlikely that the trends we see will be changing any time soon.

If you want to check out the value of your used phones or tech take a look at our site now. SellCell guarantee to get the very best price for your old device