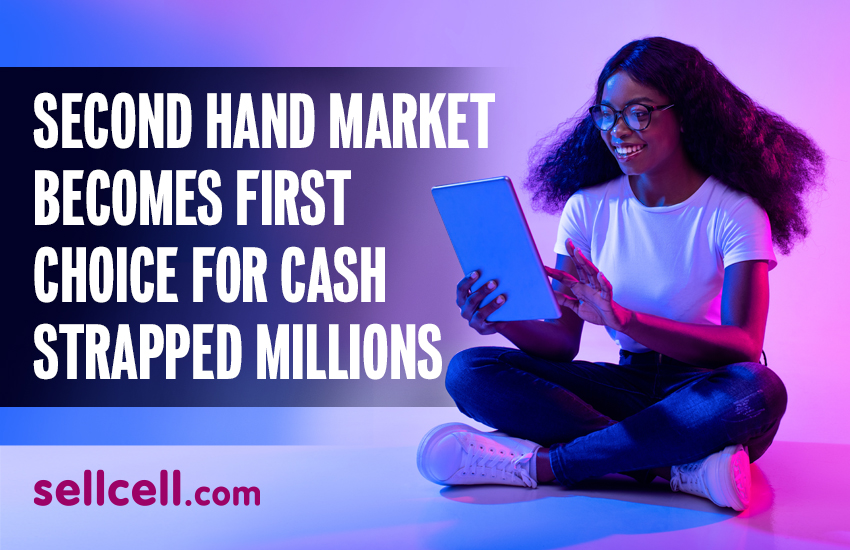 – 28.7% of consumers will turn to second hand goods & shop in charity shops
– 41.4% of consumers state they will not be buying ‘brand new’ tech

With so many facing a cost-of-living crisis, the circular economy is one market that is flourishing as consumers look to save cash.

With a global cost-of-living crisis underway, consumers the world over are looking for ways they can both make extra cash, and save on expenses. People are financially struggling, with SellCell’s recent survey showing that over 90% of individuals are facing financial difficulties, and so they need to tighten their belts across the board.

According to SellCell, the US’s leading platform for used gadgets, one second-hand market that has seen growth during this difficult period is the used tech sector—vendors that buy unwanted tech and then refurbish it so it is like new, then resell it at a fraction of the MSRP.

The aforementioned SellCell cost-of-living crisis survey yielded harrowing results for both the UK and US markets. In fact, 94% (UK) and 92% (US) of consumers say that the cost-of-living crisis will have an adverse effect on their household finances—a figure we certainly should not ignore.

Not only that, 26.1% (UK) and 20.0% (US) of consumers are concerned that the cost-of-living crisis will seriously affect their household finances, which is a clear sign they will need to cut back in order to stay afloat. And it seems that is the intention; an intention that will have a knock-on effect for traditional retailers, with re-commerce their go-to.

As SellCell’s survey reveals, 28.7% of UK consumers will save by purchasing goods second-hand or from charity shops. This trend will spread across the whole second-hand market; not just your traditional second hand brick and mortar stores.

38.4% of people won’t buy new clothes, meaning the likes of Vinted, eBay, and Depop are likely to be their outlets of choice when they need to buy a new coat or pair of boots, for example. 56.8% will shop at a budget or discount supermarket, illustrating the strain the cost-of-living crisis is putting on some retailers.

We can see the results of these consumer cutbacks across most of the retail industry, as retail continues to plummet, according to a Business Matters report. Canny consumers are looking elsewhere to make purchases, saving cash in the process.

Likewise, in the US, 25.9% of consumers plan to enter the circular economy as a consumer, buying second hand products and, again, visiting charity stores where possible. 35.8% of consumers will buy less clothing, meaning they’ll be looking for a hefty discount on any clothing they do buy; the secondary market being perfectly primed to deliver, here.

Again, proof of US retailers’ sufferings can be seen in the data above, which shows that 43.6% of US citizens will be abandoning their traditional supermarket retailer in favor of a discount or budget option.

As you can see above, 41.4% of UK consumers won’t buy the latest tech. This means they’ll look elsewhere to purchase devices, at a cheaper rate than they can with traditional first-market retailers. “Elsewhere” being the secondary market.

Another secondary market we will probably see growth is used automotive, as 9.1% of UK consumers plan to sell their vehicle in order to make some cash, replacing the car with public transport. A Car Dealer report supports this notion.

The picture is the same in the US, where 37.5% of consumers won’t buy into the latest tech to emerge, instead opting to downgrade, or keep hold of their existing tech. Or will they… ?

As the above response data shows, 20.3% of UK consumers will sell unwanted tech, and 24.1% will sell some possessions, like clothing and so on. Where better to offload such items than via the secondary market; a very obvious reason this market is booming in the face of the cost-of-living crisis.

US consumers feel the same; 10.8% of them will sell tech they no longer want or need, and 17.0% will look at reducing their stockpile of material possessions, seeking to sell clothing and jewellery to make extra cash. Again, this means the second-hand marketplace will swell with consumers looking to deal with the cost-of-living crisis head-on.

So, what does this mean for the used/second hand market?

Given the data discussed, we can see that people are more likely to move into the second-hand market, based on the savings they can make by doing so. But have consumers done this?

The answer, in short, is yes, consumers continue to flock to the second-hand market in order to save on purchases, and also to make cash by selling their unwanted items. Across fashion, tech, and automotive, to name just a few, we’re seeing growth in the respective second-hand markets.

According to an EU Business News report, 30% of consumers are thinking more about whether they really need their intended purchase, while almost 20% of consumers are actively buying second-hand and making the most of the savings the circular retail economy can offer them. The second hand market, in this case, is bound to see a substantial uptick in revenue.

The facts, it seems, are in the figures; OfferUp and GlobalData state, in a recent market analysis, that the secondary market grew by 15% in 2021, which is double that of the retail market on a whole, and we can expect that figure to be even higher once 2022’s analysis comes to fruition. Given that 82% of US consumers are buying and/or selling second-hand goods, it makes sense that second-hand marketplaces would see growth.

This growth could well continue. According to a Reuters report Bosses at UK retailer, Next, have warned of a second cost-of-living crisis on the way, meaning more people will turn to second-hand and used goods rather than buying new, factory sealed items.

Homing in on the used tech marketplace, we can see that many consumers are looking to enter the circular tech economy, if they’re not already a part of it. So much so, that business in this sector is nothing short of booming.

COO of SellCell.com (US’s no 1 used tech price comparison site), Sarah McConomy, has this to say:

Over the past six months, SellCell has seen a tremendous increase in the number of people visiting its comparison site to trade in a wide range of tech, from phones, through to smartwatches and gaming consoles. This has been driven by people’s desire to get the absolute best price for used tech, to put back into the household budget or reduce their upgrade costs. The market for refurbished tech has also seen double digit growth as more people than ever are opting for refurbished/ pre-owned devices over brand new. The future is very bright for refurbished tech.

So, we’ve heard it straight from the horse’s mouth; more people than last year are looking to buy a refurbished handset rather than buy one that is straight from the factory. Not only does this mean savings for the consumer, but it also means ecological savings, as this saves devices from entering landfill and causing environmental damage, and placing those smartphones in the hands of a new owner instead.

The Future of Commerce: Recommerce?

It would seem that, with the cost-of-living crisis affecting so many people, the second-hand markets are enjoying a surge. This is excellent news for the consumer, as the marketplaces they’re coming to know and love, such as the second-hand clothing market, or the used tech market, will flourish, inevitably offering them more choice without the need to spend a fortune.

With the potential for the cost-of-living crisis to worsen before it gets better, businesses like SellCell and the wider resale market will see consumers flocking to their digital storefronts as they seek to make savings—as well as additional cash— across the board

SellCell surveyed 3,000 UK and 3,000 US adult (18+). The survey was an online survey conducted via a leading international survey house to gauge how people are impacted by the cost of living. The full survey can be seen here. No personal data was collected or stored during this survey.