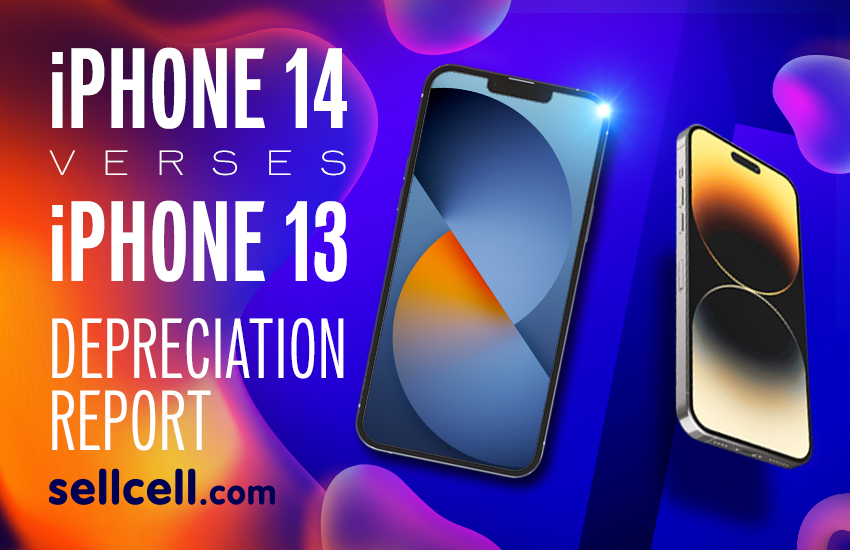 Apple released its iPhone 14 series smartphones on September 16, 2022. Looking at recent depreciation figures, we have a mixture of good and not-so-good news for Apple, with the base iPhone 14 model performing poorly in terms of value retention, but the Pro Max outperforming the iPhone 13 Pro Max and depreciating less.

So what has caused higher depreciation across the standard models? Reports such as Bloomburg’s suggest that the cost-of-living crisis, coupled with a weak economy across the globe, has led to lower demand for the 14, which will influence value retention.

SellCell’s recent cost-of-living survey report corroborates these assertions. 37.5% of the US population won’t upgrade to the latest handset this year, as many people ditch luxury items in the face of rising price hikes across the board.

Not only that, but consumer’s perceived lack of innovation within the iPhone 14 base range has led to poor take-up of the device, post physical release. This means demand is low on the resale market, too, so the value of the base range has dropped significantly.

Consumers are already trading-in iPhone 14 series smartphones; and buyers have already set the after market prices across the full iPhone range. SellCell has analysed the resale values of the iPhone 14 against its MSRP, to understand the levels of depreciation vs. the same 10-day period after Apple launched the iPhone 13 in 2021. Let’s look at the numbers…

The iPhone 14 Plus went on pre-sale on the 9th September. Buyers have already set after market prices in anticipation for its physical delivery on 7th October. The initial resale prices 10 days post its pre-sale date show a depreciation of 38.6% on average across the models. But this could change upon its physical release as the market tests the product out and evaluates the demand.

The fastest depreciating models are all iPhone 14 handsets 10 days post launch, and three of them aren’t even in stores yet (at the time of writing). On a hugely positive note for Apple fans, the iPhone 14 Pro Max 512 GB is one of the slowest depreciators across both ranges 10 days in, outperforming almost all models in the 13 range.

Of the handsets Apple has put in stores, figures provide some encouragement. The base range iPhone 14—Apple’s standard model—has lost 38.4% on average. The 128, 256, and 512 GB models have seen depreciation of 36.7%, 38.2%, and 40.3% respectively. Anyone plumping for the maximum storage version of this range will likely balk at a 40.3% nosedive in value; the worst of the three models, and a cash loss of $443.00 against the MSRP.

This is likely down to several factors, as mentioned earlier. The cost-of-living crisis means many people simply aren’t upgrading their handsets this year. Plus, there is a perception among some Apple fans that the standard 14 offers little more than the (now less expensive) iPhone 13 base model. So there is less incentive to upgrade.

However, despite the very real cost-of-living crisis, the current state of financial affairs hasn’t stopped iPhone fans investing in the most expensive Pro Max range. Depreciation is an average of 19.6% ($257.25) with all four handsets considered, meaning demand is highest for these particular models. The 128, 256, 512, GB, and the 1 TB versions have seen depreciation hitting 21.7%, 19.4%, 18.2%, and 19.0% respectively. This means the 14 Pro Max range has performed better than the 2021 13 Pro Max range, which lost 21.4% of its value on average, in the ten days following its release last year.

As people tighten their belts, we may see a surge in sales for the less expensive 14 Plus range, which is available in October.

iPhone 14 Max Pro Could Save the Day

It has to be said, compared to recent years, the value retention of the iPhone 14 range is a little underwhelming at the lower end of the price spectrum. Losing over 40% of a handset’s value in just 10 days is practically unheard of in Apple terms. This said, the 14 Pro Max range is performing extremely well, and is Apple’s most expensive device, meaning people are willing to pay for the rich feature set the flagship 14 Pro Max range offers, even in the face of a financial crisis. This could be Apple’s 2022 winner.

We may well see the Plus range turning things around even more for Apple, particularly considering the cost-of-living crisis we’re all currently experiencing and the fact that many people are downgrading their handsets to deal with mounting financial strain. Time will tell.