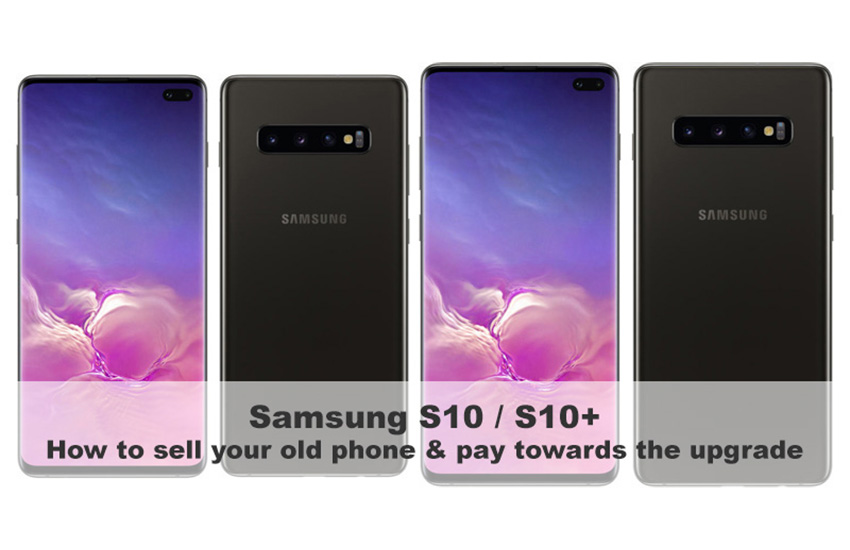 The Samsung S10 & S10+ have already both been predicted as the ‘best phones of 2019’, despite only being released on March 8. The Galaxy S10 lineup officially includes the S10, S10+ and also not to be forgotten the S10e. But is it worth upgrading from an older model and how can you do this without putting a huge dent in your finances?

Is it Worth Upgrading?

There is always lots of debate about whether there are significant enough developments between each model to make upgrading to a newer version worthwhile in terms of time, cost and hassle factor. With the new Galaxy S10 and S10+ there are some pretty big upgrades that set it apart from previous versions

Samsung has proudly boasted that with the new S10 line-up they have produced the best screens in the market. We all know that Samsung supply Apple with their screens on the newer models so have they edged the screen further away from Apple’s? The answer is Yes! These devices are the first dynamic OLED screens to be launched that have achieved the HDR10+ certification. Even the untrained eye will be able to notice that the colouration of the devices is brighter and sharper – so a thumbs up on this one

The Samsung S10 has a nicely sized 6.1-inch screen and the S10 + has a larger 6.4-inch display. Both devices feature the new “Infinity-O” screen which also offers the small cut-out hole for the camera as a tiny spot on the screen- which feels seamless on the display

Improvements to the camera functionality nudge forward a little bit further every year, but has the S10 line-up really taken this to a new level? Well, the S10 & S10+ have a triple lens facility and a cracking 12-megapixel lens plus a really wide lens for those budding photographers. Whilst this isn’t revolutionary it certainly has an upgrade appeal for those who use the camera day in day out

We all know that Apple and most of its peers have moved away from fingerprint recognition toward Face ID recognition. Samsung have taken the old fingerprint scanner to the next level by introducing a built in one, which is now expertly embedded in the phone to save the traditional space at the front. This means that the user can tap the phone anywhere in a specific point to open phone, apps etc

Samsung really have kicked it out of the park, by introducing their super fast, yes, wireless charging. With Samsung’s 2.0 support, users will love how they can now charge their phone as quickly wirelessly as plugged in. The team at Samsung believe that sharing is caring, and they have also introduced the Wireless PowerShare Facility. Yes, a user can share their power with another device wirelessly. For the SellCell crew this is one of the best features of the device and one we would definitely consider upgrading for

There are loads more cool features, including their flexible storage available in different storage tiers, and the ability for those heavy users to even opt for a humungous 1TB option. Watch out for the 5G version, as discussed available around June time too

For those who think the S10 and S10 + are a little too pricey, Samsung has launched the Samsung S10e to compete head to head with the Apple iPhone XR, as the more “reasonably priced” model. The new 5G version of the S10 is also going to be released around June 2019, for all those looking to wait to upgrade then and jump on the 5G network. The Samsung Galaxy Fold is also looking like it may be launched soon. It’s early announcement means that it pipped competitors to the post as the first folding phone

Early Issues with the Phones

It would be remiss of us to just wax lyrical about the new features without reporting some issues that users are currently having with the devices. As with any new launch, there have been a few reported issues from early S10 & S10+ users that Samsung will probably quickly fix with a software upgrade. There have been some discussions around a proximity sensor issue that can lead to the device switching on when in the users pocket. More worrying is a small number of users have reported that the face ID feature can potentially be unlocked by another user. Unfortunately the Samsung feature isn’t as advanced as Apples as doesn’t have the 3D – interactive feature. It has been reported that members of the same family have been able to unlock devices due to similar facial features

On balance though, all new launches will require software fixes and enhancements as users actively test the devices. Our view is that the S10 line-up is definitely worth making the upgrade from a feature perspective

Affordable – or too Pricey?

How can I sell my old phone to put towards the upgrade?

Main question, what about the price? What are the options out there? Could I use my old device as collateral to help me fund a big chunk of the new device? Let’s take a look and take the S9 & S9+ and see if it’s economically prudent to look at upgrading to the newer model and determine how much value there is in these phones

Galaxy S10 Upgrade – is it Affordable?

So is it worth upgrading from say a Galaxy S9 to an S10? How can you make that affordable? The tables above provide some good illustration of the deals out there and what you can sell your old S9 for

A&T are offering contract deals starting at $30 per month over 30 months. There are the usual terms and conditions dependent upon credit position and if an upfront payment is made. This is a pretty good deal in our view

Version are offering a similar deal on face value, although their contract term is shorter and over 24 months at $37.49/ per month

The Current Trade In Value of a Galaxy S9 on SellCell is: $300. This means that you can visit SellCell and currently sell your old S9 for $300

SellCell.com is the US’s largest comparison site, comparing all of the leading BuyBack Companies. With a Best Price Guarantee, users are assured to get the maximum amount of cash when trading-in their Galaxy S9, or they will get double the difference back. The price on SellCell for an S9 is at $300. This means that a third of the price for an S10 will be immediately paid off by the user, or the first 10 payments on an AT&T contract will be covered from the SellCell trade- in value. This will certainly be helpful. Alternatively we see a lot of customers just pocketing this cash and swallowing the monthly $30 fee, which is minimal frankly for the sheer quality of the new S10 that you are going to be picking up

Galaxy S10+ Upgrade – is it Affordable?

A&T are offering contract deals starting at $33.34 per month over 30 months. There are the usual terms and conditions dependent upon credit position and if an upfront payment is made. Again for a flagship phone, this seems like a credible deal

Version are offering a similar deal, although their contract term is shorter and over 24 months at $41.66/ per month

The Current Trade In Value of a Galaxy S9+ on SellCell is: $335. This means that you can visit SellCell and currently sell your old S9+ for up to this value by simply using the tabs on the page to select the appropriate conditions for your old device and get your value instantly

Trading-in the Samsung Galaxy S9+ on SellCell, enables the user to put a generous $335 towards their new phone, or with the AT&T contract pay for nearly a full year (11.1 months to be exact) off the 30 month contract payments. Happy days!

So, Is It Worth The Upgrade?

There is an argument that waiting a month or so may be an option as manufacturers tend to drop their list price after a few months, however the old phone will drop in value also at this time, so leaving it too late can just mean you have less to put towards the new S10. Read here to find our more about the best time to sell your old phone

On balance, the new S10 lineup of devices are both aesthetically pleasing and offer some very nice feature upgrades that most people would benefit from, especially the Samsung enthusiast. The wireless charging feature, flexible storage options and fantastic camera features nudge phone technology on just that little bit more

From a pricing perspective, there is no doubt that this new generation of phones are on the pricey side, so the decision to trade in your old device has to be a personal one. Not many people would be able to find $899 upfront, but the contract deals around are very reasonably priced and make a beautiful phone affordable. The option to trade-in your device on SellCell.com and receive up to $335 for the S9+ is also very attractive providing the phone is in good condition. That is literally enough to cover all of the users first year of contract payments

The team at SellCell.com agree that an S10 upgrade is on balance favourable. With the current contract deals attractive and the residual value available in existing handsets holding out to put towards a new phone, the proposition of being an early S10 adopter seems attractive

Keep an eye on the trade-in price of your old device if you decide to upgrade here by visiting: SellCell