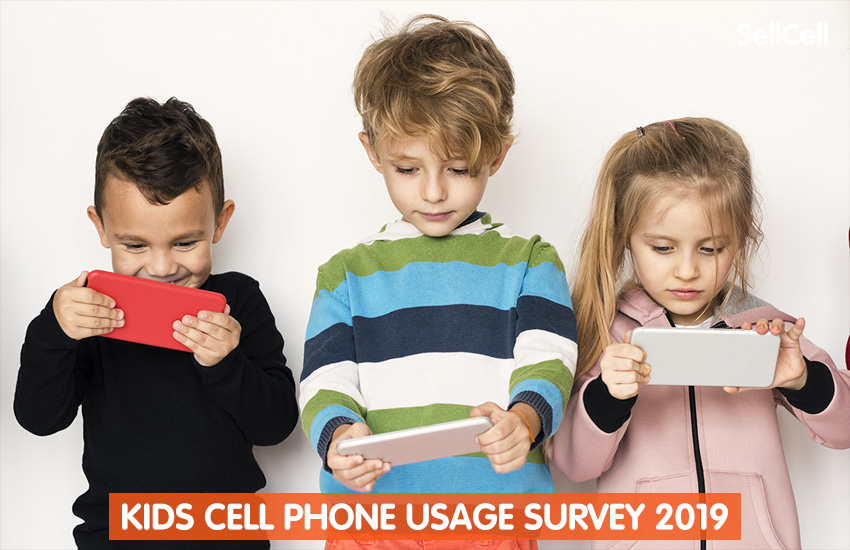 42% of Kids Spending 30+ Hours a Week on Their Phone. Plus More Facts…

SellCell has set out to answer some of the key questions around how kids use cell phones. We have explored when parents typically buy their kids their own phone and the reasons why. We reveal how much time on average per week kids spend on their phones and if parents police their child’s cell phone activity. We have discovered what kids do on their phones and how much parents typically spend on buying a phone for their child.

With so much noise around childhood obesity, behavioral issues and cyber bullying linked to childrens’ phone habits; are parents closely monitoring their child’s phone usage? Be prepared to be shocked at some of the insights revealed below!

SellCell surveyed 1135 parents in the US with children between the ages of 4 and 14. Survey conducted July 2019 (See below for more information about the data and methodology)

1.) WHAT AGE ARE KIDS WHEN THEY FIRST USE A CELL PHONE?

How young are children when they are first granted access to a cell phone from a family member or friend? We asked over 1000 US parents to give us an honest insight as to when they allow their kids access to a phone

Are we developing a nation of ‘Toddler Techies’ or ‘Belligerent Bambinos’?

2.) WHAT AGE ARE KIDS WHEN PARENTS FIRST BUY/GIVE THEM THEIR OWN CELL PHONE?

At what age do parents ‘bite the bullet’ and actually allow their child to have a cell phone of their own? When do parents think kids are mature enough to ‘own’ their own phone? The research above indicates that parents allow their kids to ‘use’ cell phones from quite an early age, but is this a similar pattern when it comes to allowing a child to have their own cell phone? Let’s take a look at the main highlights:

3.) MAIN REASONS PARENTS GIVE THEIR KIDS A PHONE

So, why are US parents allowing kids access to a cell phone? Do parents feel that a cell is a necessity in this modern world to stay in contact with them? Are kids feeling pressured to get a phone to keep up with their buddies?

Or…now for the real honesty! If parents are truthful do they use phones as a way to entertain their kids and give themselves some needed downtime? We asked parents to select the top 3 reasons why they allow their kids to use a cell phone. Let’s take a look at what US parents said:

4 in 10 Parents Allow Kids to Use Phones to Enjoy Peace & Quiet!

4.) WHAT DO KIDS MAINLY USE THEIR PHONE FOR?

What are kids primarily doing on their phone? Are they doing something educational like homework or communicating with the family? Alternatively, are they spending time on social media, chatting with friends or gaming? We asked parents to list the top 3 activities that kids are doing on their phones. Let’s explore:

5.) HOW MUCH TIME PER WEEK DO KIDS SPEND ON THEIR PHONE?

We have come to the point in the survey that may cause the most controversy. The question that we all want to know is how much time are parents letting their kids spend on mobile phones on a weekly basis? With reports stating that too much cell phone screen-time leads to behavioural issues, rising childhood obesity levels and online bullying should we be limiting the amount of time that kids are on their phone? Or as we have such busy lives are phones now an integral tool fabricated into family life that can’t be easily extracted?

Let’s see the real honest view as to what parents feel is an acceptable amount of daily cell phone screen-time. Be prepared to be shocked:

Are we are creating a nation of child cell phone junkies? Kids are glued to their cell phones for a full 2 days a week (30 plus hours) and parents are letting them!

6.) DO PARENTS THINK THAT HAVING A CELLPHONE HAS A POSITIVE OR NEGATIVE AFFECT ON THEIR CHILD’S DEVELOPMENT?

Parents have bravely admitted that their kids are glued to their cell phones for in some cases 30 hours a week. As parents are potentially now becoming the enablers to cell phone usage amongst children – is there some reasoning behind this? Do parents feel that their child using a phone has a positive or negative affect on their development. Let’s find out:

Parents have in the main admitted to letting their kids have a lot of cell phone screen-time, but are they screening their kids cell phone usage? We asked if parents know their kids phone passcode? Let’s see the results:

8.) HOW MUCH ARE PARENTS PREPARED TO SPEND ON THEIR KIDS PHONE?

Many parents have admitted to buying their kid a phone but how much are they prepared to spend on the device? Are they opting for a top of the range phone or a more reasonably priced device that could possibly be used or refurbished? Let’s take a look at what parents are prepared to pay:

Some parents spend several hundreds of dollars buying their kids a cell phone, but the majority opt for a more sensible price bracket of up to $100

Download press kit for all data, graphs and images: