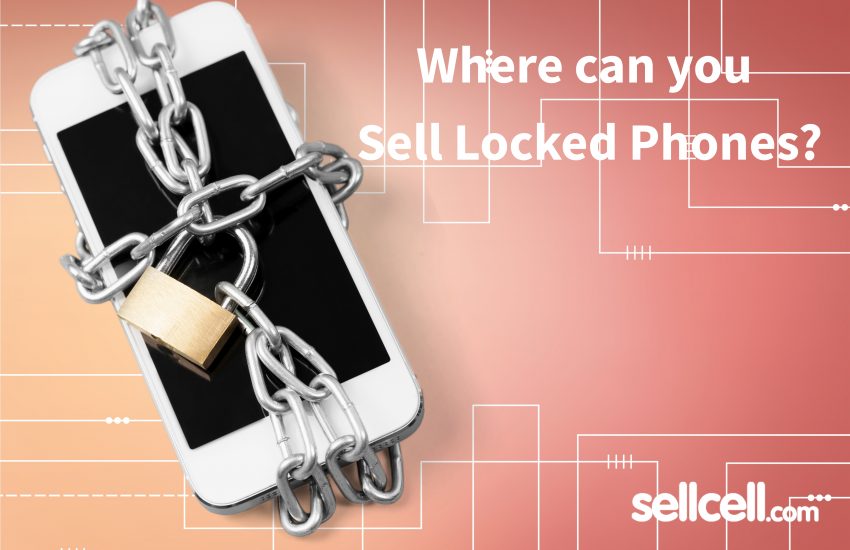 Previously, if your phone was locked it could not be sold or the amount you received for it was very low. The good news now is that SellCell can offer you a great value on locked phones through our partnership with SellLocked, based in Arizona. SellLocked.com specialize in buying locked iPhones including those that are Activation Locked, Financed and have bad IMEI’s. The Team at SellLocked.com have worked with SellCell to break down the different types of locked phones commonly seen in the US Buyback market

What are the different types of Locked Phones?

SellLocked.com & SellCell have categorised the different types of locked phones as follows:

These are devices that have been fully paid off, have no associated apple ID or iCloud/ Google account linked to them; and aside from any cosmetic damage, have nothing wrong with them that would prevent the phone from being activated or used anywhere in the US. These phones are able to be unlocked by their original carrier, and can be used on any new users account. For the most part, these are the normal types of devices that everyone buys (all buyback stores, carrier buyback programs, etc.)

This occurs when the user has forgotten the passcode and then enters it too many times in a short space of time. This can then disable the device. iPhones give you a cooling down period to try and remember the passcode before finally disabling the device. If the user cannot remember the passcode with iPhones, the only way to resolve this is to totally erase your device and start again. This deletes everything saved, unless it is backed up. Google allows you to go into the security setting and reset your password and recover your account

These are devices that are still under contract by the carrier they were originally leased by; but the account holder is still making payments on these devices. Devices with a remaining balance on them are not able to be unlocked or activated on another user’s account. If a financed phone stops getting payments made on it, it will turn into a blacklisted phone (see Bad IMEI lock type).

A good real life example of this would be someone wanting to upgrade their phone while still owing money on it, but not being able to afford to pay the phone’s remaining balance owed all at once. They can sell their device through SellCell /IBL, receive payment, and pay off the existing loan they have for that phone, allowing them to then upgrade (or maybe even downgrade)

This is when the devices IMEI number, or international mobile equipment identity number (a unique set of numbers that allows for carriers, law enforcement, etc. to identify a specific phone), has been blacklisted by that phone’s original carrier, an insurance company, or other entity. Bad IMEI phones are unable to connect to any cell towers (at least here in the US) to make calls or go on the internet, basically making them an overly expensive iPod.

An example of this would be if someone lost their phone and reported that phone as “lost” to whoever has agreed to insure their phone for them, and after receiving a replacement phone from that insurance company, they then found the phone they had thought they had lost. The phone would now be useless, but assuming their insurance company doesn’t need it back, they would be able to sell it to us for a competitive price. The most common scenario is someone getting tricked into purchasing one of these devices. A lot of times people will sell a phone that they still owe money on to an unsuspecting customer, and once the sale is final they will stop paying their bill, making that phone they just sold blacklisted. For the person that just bought the phone, the phone is now useless on all carriers

Please note that bad IMEI devices need to be fully functional aside from their bad IMEI. In order for a device to be sold as bad IMEI, they still need to be able to access the device’s apps, settings, etc.

This lock type is commonly referred to as “iCloud lock” for iPhones. This is when a phone is no longer accessible (maybe due to a forgotten passcode) and needs to be restored, but is linked to an existing iCloud account. Upon restoration, during Apple’s activation process, the phone will prompt the user to enter in the iCloud account details of the most recently used account. If the user is unable to do this, the phone is essentially a brick, and only good for its parts. A good example of this would be if a consumer is locked out of his or her iPhone and needs to reset it. Upon re-setting it, the user realizes they forgot the passcode to their iCloud account that was associated with the phone they had just reset, and are unable to provide the information required to activate that phone

A more sinister, and unfortunately common scenario would be someone purchasing a second hand phone through a local selling platform (ie. Offerup, Craigslist, etc.) and being tricked into purchasing a device from someone without getting the original owner’s iCloud information removed from the device. This scenario is also commonly seen with the “Bad IMEI” lock type. Fortunately, most of our customers that have reportedly been scammed into purchasing one of these locked phones have been able to retain most, if not all of their original money spent on that device

Activation lock for androids is usually referred to as Google lock which is essentially iCloud lock for androids. Though some android devices not powered by Google may have their own form of factory reset protection or “FRP”, Google’s google lock is the most effective with its method being server based (much like Apple’s iCloud lock) which requires the new user to sign in with the old user’s google account in order to gain access. This of course can be avoided if the previous owners google account is removed through the settings app prior to resetting the phone

It’s very common in the US for someone to buy a phone with a google lock on it, and this will mean that the previous owner forgot to remove the google account or misplaced the password. If you haven’t got these details your handset will be google locked. As Android is a mobile system that is operated by Google across a wide number of smartphones including Google, Samsung, LG, HPC, Sony , Huawei, Google Lock can affect a lot of handsets. Google and Samsung both provide commentary online about how you can remove an activation lock from the device settings or via an online account.

How do you establish if a phone is locked?

To find out if a phone has a bad IMEI, google search iPhone blacklist checker, or ESN checker. There are plenty of websites that will check the devices status for a small fee or sometimes for free. SellLocked will be launching an an IMEI checker on our website in the future

When you set up the phone you will be required to verify the google account and password. If you haven’t got these details your handset will be google locked.  If you are a new owner, this may mean the previous owner has forgotten the password and not removed their account details

Can you get a good value for locked phones?

Yes, if your phone is locked, you can still get a decent amount of money for it according to SellLocked. The team comment: ‘It really depends on numerous factors including the condition of the phone, but the short answer is if your phone is locked you will definitely get more than you would think. For a blacklisted verizon/unlocked carrier iPhone XS Max 256GB for example, through SellCell.com we are currently paying $745 which is more than nearly all online buyback stores pay for that same phone with no locks at all. For iCloud locked devices, the pricing is less, but it is still pretty high considering previously the industry regarded these devices as obsolete or an overpriced paper weight’

So, how much is my locked phone worth?

– search for your device on SellCell.  You can use the search bar to find your make and model

– select the ‘Locked / Blacklisted’ option to trade-in your phone today