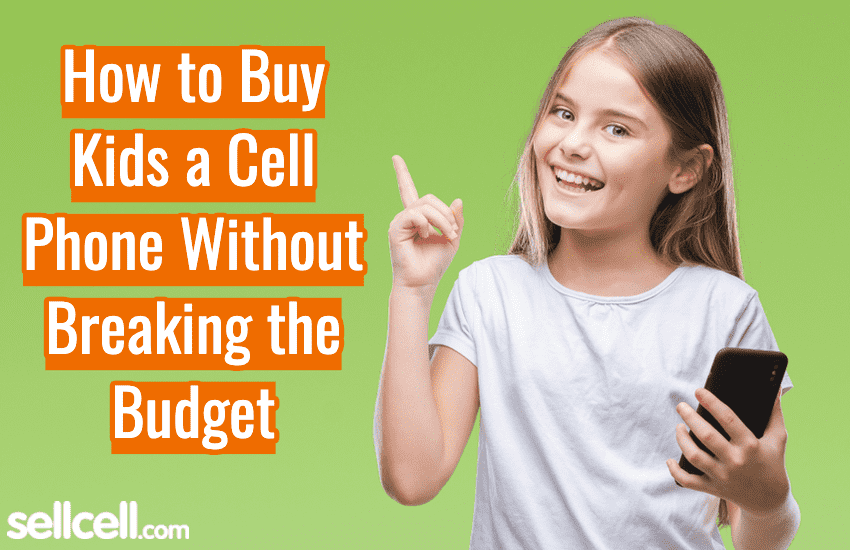 “Mom, Dad, I REALLY need a new cell phhhooooonnnnnneeeeee…” your kid whines once again…for the 417th time. Either your kid needs her first phone, she busted the old one, or she just isn’t content with that flip phone anymore. Regardless, you realize that it really is time to buy your kid a new phone.

But of course, you’d rather not go into debt over this thing that will probably get used more for gaming and ridiculous picture taking (you know, the dog ears, cat face, and obscene amounts of glitter and stars – yeah, those pictures) than for an actual quality purpose.

It’s time to get that new phone, but let’s limit the damage shall we?

Here’s a slew of options for how you can buy your kids new phones without blowing the budget.

How old is your kid? Do they really NEED a phone?

If your kid is in a ton of after-school or weekend activities and needs to get hold of you on a regular basis, then sure, they should probably have a phone.

If, however, you drop them off at school, they have their school day, and then you pick them up again (at the same time every day), they really don’t need a cell phone.

Before you try to find a good deal on a brand-new phone just because your kid wants one, take a step back and ask yourself if the need is really there. If it’s not, the answer is simple. Don’t buy them one!

Kids will beg and plead with you for a phone. They’ll even go as far as saying you’re risking their safety by not getting them one (those kids…they’ll tell you anything as long as it gets them what they want!).

In reality though, do you know what those kids do once they get their cell phones?

Thanks to a recent SellCell survey, we do.

So basically, cell phones are just toys. And some parents are spending $850 or more on a toy…for a 6-year-old.

If our kids want cell phones before high school, we’re going to make them pay for it.

We figure this will do four things for us:

Phones are expensive, and if you don’t think your kids need a cell phone, don’t buy them one. Instead, if they want one so bad, tell them to figure out how to earn money and buy one themselves.

If they do nothing, fine. They still don’t have a phone that you really didn’t want them to have in the first place.

If they shock you and make $500 for a phone, then that’s just impressive and you should tell them that. You might just have the next Warren Buffett on your hands there.

Remember what I said about kids and their cell phones earlier? To summarize, their phones typically look like garbage. They’re cracked, dirty, sticky, and after a while usually half functional. Soooo tell me why you’re going to get them a new one?

If I were buying a phone for our kids, I’d go straight to the refurbished phone.

And, guess how much you can save by going refurbished? Make sure you’re not eating anything…because you might choke at this.

A Refurbished iPhone XR, 128GB through SellCell starts from just $393.

4) YOU Make an Upgrade and They Get Your Current Phone

If your kid wants a phone bad enough, then they should be willing to use an old phone. And, chances are since you’re reading this article, you’re pretty cost conscious and are probably due for an upgrade yourself. Perhaps it’s time to kill two birds with one stone.

You make an upgrade to a phone that you want and your ‘I-need-a-phone-or-I’ll-die’ kiddo can simply get your phone.

(Am I starting to sound mean right now? So much for being a millennial parent… Hahaha 😉)

5) Budget for the Phone Over Time

High-cost items shouldn’t be purchased at the drop of a hat. They should be researched, comparisons should be performed, and weeks (maybe even months) of thought should be put into the decision.

While you’re thinking about your big purchase, why not start to save for it? Stash away $50-$100 a month and pay for that phone with cash.

By getting the cash together up front, you’ll make a better decision of what to buy, and you’ll also save on the back-end since that phone is totally yours.

6) Buy a Phone with a Pre-Paid Plan

Have you ever heard of a pre-paid phone? Back in the day, it used to mean that you’d use this relic of a cell phone and then you had to buy some gift-card looking things to get pre-paid minutes on your phone.

What a pain in the butt, right?

Pre-paid phone plans are way better now. In fact, there’s really no way for anyone to tell if you even have a pre-paid plan. AND, this could be a way cheaper option for your young kiddo!

All you need to do is hop online and Google “AT&T Pre-Paid” or “Verizon Pre-Paid” (or you know, whoever you want service through). From there, you’ll see options as low as $25 a month for unlimited calls and text, and 8GB of data month. All you have to do is pay $300 up front for the entire year. Pretty sweet deal, right? And occasionally, the phone comes at a cheaper rate too! Double win!

7) Buy Them a Reasonable Phone…with Conditions

If you’re buying a phone for a child under 18 years old, there’s absolutely no reason to buy them an expensive new one. But, there may be scenarios where it does make sense for you to provide a phone without some sort of contribution from them.

Perhaps they’re involved in 2-3 after school activities. Or maybe they volunteer at the local food shelter and therefore don’t actually earn any money (nor do they have time to earn money). Whatever the case may be, you might just talk yourself into buying them a phone.

If you do just hand them a phone though, be sure to do it with conditions. This will likely save you money in the long run.

Oh, and one more thing. You’ve actually got to follow through on these conditions if they’re going to take them seriously. If you let some of them slide, you’ll lose all traction and get suckered into pretty much any phone purchase in the future.

Stay strong. Stick to your guns. This phone is their gift. Not their privilege.

When you finally do decide to pull the trigger and buy your son or daughter a cell phone, be sure that your costs stop there.

When SellCell polled over 2,000 parents in a recent survey, 40.8% of them revealed that their child made in-app purchases without their knowledge – mostly for mobile games (you know, to buy special dance moves, cool weapons, better outfits, etc.). For some, this cost was only $10 or less. For others, it ballooned up over $100. So beware.

Your best bet is to disable in-app purchases on your kiddo’s phone. That, and actually talking to them about it – that the purchases aren’t free, and that they’re either going to get charged on your credit card or through your phone bill…oh, and by the way, “Here are the consequences if that happens.” And again, stick to your guns on those consequences.

Don’t Blow the Budget on That Phone – It’s Not Worth It!

If you immediately buy that phone for your child, they’ll be so happy and you’ll feel like a hero…for about the first two days.

Then, they’ll misuse it, break it, be unhappy that it’s not the absolute best one on the market, blah blah blah. It will happen. So why not just be smart about the whole thing?

Look at the grander picture:

These are all points worth noting and could save you thousands of dollars in the long run.

Will you be buying your kid a new phone soon? What are you doing to save money?