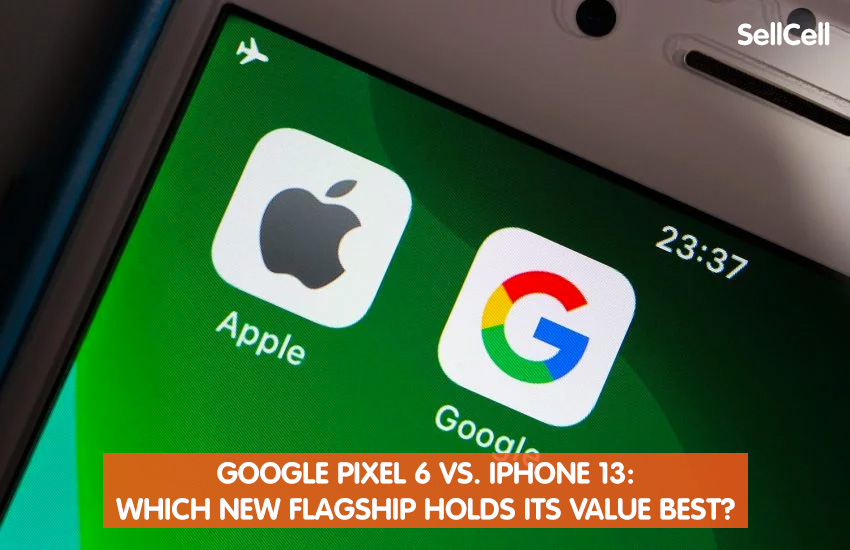 The iPhone 13’s depreciation rate is half that of the Google Pixel 6.

– Apple’s iPhone 13 is the Christmas gift that keeps on giving, with its value improving since initial depreciation post-launch.
– The iPhone 13 holds its value by 50% more than the Pixel 6, with Google’s handset only one month into its life cycle.
– SellCell correctly predicted further iPhone 13 value recovery between months two and three.

Apple is now 3 months into its latest generation of iPhone with the 13-series. However, two months post iPhone 13 launch, Google’s Pixel 6 hit the shelves. Some lauded Google’s latest smartphone as a serious contender to Apple’s crown. So, is it?

Well, despite an incredibly impressive spec sheet, even when we compare it with the iPhone 13, Google’s new flagship, seemingly, isn’t looking like an urgent threat to Apple’s crown… at least not just yet. How is this? Well, Apple’s iPhone 13 range of smartphones is holding its value impressively since its September debut. The Pixel 6? Not so much.

Both smartphones have been subject to the same component shortages as almost all other brands in the tech sector, no matter what hardware they manufacture or design. This means that stock availability has been lower than expected, driving demand up while supplies remain limited. Or, at least, this is what one would expect.

SellCell has compared Apple’s iPhone 13 depreciation over three months with that of Google’s Pixel 6 depreciation one month after launch. Let’s see whether the latest handset from Google could see a similarly powerful position post-launch as the iPhone 13, and whether the Pixel 6 is shaping up for a land-grab.

How much is your handset worth? Find out now

SellCell has researched trade-in values across over 45 trusted buyback vendors, which illustrates trends associated with the depreciation rates of both the iPhone 13 and the Pixel 6 smartphone ranges. It is too early to know what Pixel 6 depreciation will look like in months two and three. However, we may not need that information to foresee how the Pixel 6 measures up against Apple’s latest handsets.

SellCell’s iPhone depreciation analysis last month illustrated how well Apple was performing overall, after two months on the market. Not only that, but SellCell also correctly predicted that the iPhone 13 range could see further recovery as the year draws to a close:

Therefore, it wouldn’t be unreasonable to believe that—until Apple starts to meet the unprecedented demand with a supply of iPhone 13s stocking the shelves—we may see models recovering even more value as 2021 closes out.

As we can see from the data above, the value of the iPhone 13 series has improved between months two and three. Not just one or two handsets, either; we can see value recovery across every model in the 13 range. This is impressive. It shows that, despite the knowledge of a longer wait for the iPhone 13, consumer intent hasn’t waned. People have waited for the latest handset from Apple, be that patiently or otherwise.

Apple’s handsets are now hitting stores though, with the 13 Mini and standard 13 (supposedly) available. What this does to value depreciation across the 13-series remains for us to see. However, it wouldn’t be unthinkable that the rate of value recovery would slow now that more consumers are receiving their handsets.

Despite the Google Store confirming its inability to ship Pixel 6 handsets until January 2022, we don’t quite see the same initial trends as with the iPhone 13 in month one. Where the average depreciation value—across the whole iPhone 13 range—sat at 24.9%, the Pixel sees a less impressive initial tumble of 42.6% on average across all five handsets.

Curiously, it is the lowest tier Pixel 6, the standard 128 GB model, which performs best in month one. It lost only 36.6% of its value, which isn’t that far off the 34.9% depreciation the iPhone 13 Mini 512 GB saw in the same time frame. Granted, this was Apple’s worst-performing handset within that first month post-launch, but it illustrates the ground Google’s Pixel has made in the race to grab a share of Apple’s land.

Of course, it wouldn’t be fair to suggest the Pixel 6 can’t enjoy the same value recovery as the iPhone 13. Even so, if initial depreciation values are anything to go by, this seems unlikely. The Pixel 6 range of smartphones has lost almost double the value of the iPhone 13 range within the initial one-month period. SellCell will return to these figures in January to evaluate the Pixel 6 depreciation performance over a three-month period post-launch.

What Does This Data Tell Us?

Most importantly (and least surprisingly) the data tells us that Apple demand hasn’t slowed at all. At least, not up to now. We could see iPhone 13 demand leveling out as more consumers receive their handsets. This means that iPhone 13 depreciation could plateau over the next couple of months as we pass through the Christmas buying window.

As mentioned, the least expensive Pixel 6 128 GB has performed well against its market-level opponent, the iPhone 13 Mini. This suggests that, if Google is to snatch some of Apple’s real estate, it will be at the lower end of the spectrum with the less expensive Pixel 6 models.

This isn’t to be sniffed at, though. Low-cost phones means more people can afford them. Theoretically, more people will then buy them, so Apple could lose some ground to Google here.

The data also suggests that demand for the Pixel 6 wasn’t as high in the first place. Which is probably unsurprising; iPhone holds the best-selling top spot for a very simple reason. That being because it is a high-demand device. Everyone wants a slice of the Apple pie, more so when there isn’t enough to go around.

Let’s be fair and say that Google’s efforts, up to the Pixel 6, have failed to wow consumers on a serious level. Without that confidence, forged during previous generations, no amount of promises on paper are going to create a demand as high as that which Apple has spent years crafting.

Sure, the Pixel 6 looks like an amazing smartphone, outshining the iPhone 13 in some respects. However, consumers go with brands they know they can trust. Google has been on the smartphone market for half the time Apple has. Consumers are likely to need a couple more generations of Google Smartphone before we see any real shift in the topography of Google’s market share vs. Apple’s.

Summary: Can Google Claim Any of Apple’s Smartphone Market Share?

It is difficult to say at this stage. While the Pixel 6 initial depreciation figures aren’t even close to Apple’s iPhone 13, this doesn’t mean we should discount the Pixel 6 altogether.

Not only is the least expensive of Google’s new handsets holding its value best; Google is also creating demand of its own by suggesting that no further Pixel 6 smartphones will ship prior to January 2022. Will Google capitalize on scarcity, or catastrophically miss out on holiday sales due to low stocks? That all depends on whether consumers are happy to order and wait it out, as iPhone buyers have.

The data, however, may simply confirm that you are better off, investment-wise, buying an iPhone than any other smartphone brand. Whether you trade in two months or two years down the line, SellCell’s continuous research across over 45 trusted buyback vendors tells us that your investment is best protected by Apple.

By accessing so much data, SellCell can accurately illustrate which smartphones perform the best in depreciation terms. It is for this reason that, when you come to trade in your handset, you should always use a comparison service like SellCell. That way, you know you’re always getting the best protection on your initial financial investment by guaranteeing yourself the best return.

SellCell analyzed data across over 45 registered buyback vendors, determining trade-in values of the iPhone 13 and Pixel 6 models. It analyzed iPhone data in the three months since launch and Pixel 6 data in the first month since launch. SellCell used this data to calculate the depreciation of the iPhone 13 and Google Pixel 6 to see if there was any comparison to make. SellCell then identified trends in depreciation data for the iPhone 13-series and Google Pixel 6 range.