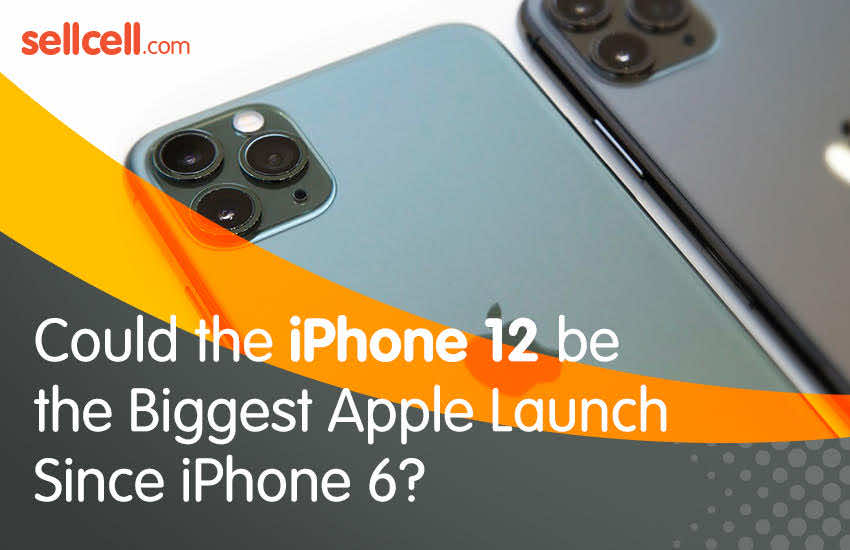 While iPhone users have been waiting impatiently for news on the launch of the iPhone 12, Apple remains resolutely coy about the much-anticipated unveiling of the new handsets. The phones even failed to make it to the Sept 15th Apple Event.

When Apple does announce the iPhone 12, our data tells us that this could be the biggest Apple launch since the iPhone 6 in 2014. This is big news for Apple, taking into account that they have recently been beaten to the top spot by Hauwei in terms of units sold last quarter. If this is to be their largest release in 6 years, we may well see Apple reclaiming their crown.

So, what brings us to this conclusion? By looking at historical phone trade-in data prior to the launch of a new iPhone, we can see a trend emerging. If a new handset is going to be popular, more people trade in their old iPhone to make space for the latest model. You can see, from the table above, that 2014 delivered a 61% increase in trade-in activity. Up to now, this figure has remained unmatched.

That is, until the anticipated launch of the iPhone 12. Apple has caused such a furor over their next smartphone that more people are trading their old iPhones in now that they have in the past six years, with the figure already showing an additional 2% on 2014’s telling statistics. As a result, the data infers that this is going to be the biggest launch of any iPhone model since the iPhone 6.

The data you see above relates to percentage increases in iPhone trade-ins in July-September of that given year when compared to the trade-in figures for the previous quarter (in this case April-June). We are only at the start of September and, already, we are seeing an increase on that 2014 high. As trade-ins are unlikely to slow down, we can safely assume this is going to translate to a profitable release for Apple.

Given that we’ve seen a 63% increase in iPhone trade-in activity ahead of Tuesday’s announcement, you’re probably asking what handsets are the most popular trade-ins. As you can see from September 2020’s iPhone data, above, we have handsets dating back 5 years. This not only shows us that people are trading in some of the most recent iPhone models ahead of the iPhone 12 release date, but also that five-year-old handsets like the iPhone 6s have remained reliable workhorses since 2015.

As the figures above will tell you, if you own an Apple smartphone from one of the four generations prior to the iPhone SE, then you’re more likely to be trading your handset in. The iPhone X is currently the most traded-in handset, followed by the iPhone XR. This indicates that once a handset has reached 2-3 years in use, consumers will start to feel inclined to upgrade to the latest smartphone.

Perhaps surprisingly, the iPhone 11 Pro Max saw release only one year ago yet claims the fourth spot in the figures above. We know that 5G, compact form factor, and camera upgrades are some of the things consumers are looking for with the iPhone 12 (from SellCell iPhone pre-launch survey). So, with this in mind, its position in the trade-in data maybe isn’t all that astonishing.

There are rumors circulating that there will be four variations of the iPhone 12 on offer; iPhone 12 5G, iPhone 12 Max 4G, iPhone 12 Max, and iPhone 12 Pro. In turn, one of these is rumored to boast a tiny 5.4″ screen. The desire for a more compact iPhone, shown in our survey, could easily translate to a significant upturn in trade-ins and therefore increased sales for Apple’s iPhone 12.

Don’t Hold Out on This One

If iPhone owners are planning on holding on to their old handset until after Apple announces the iPhone 12, our advice is…don’t. Typically, iPhones will depreciate in value by around 13% in the first month after a brand releases a new handset. The reason for this is pretty obvious; a previous-generation smartphone is no longer the most advanced. This weakens its appeal as a new iPhone enters the market, complete with all of its upgraded bells and whistles.

Most buyback companies on SellCell offer a 30-day price lock. This means that if consumers decide to trade their iPhone in now, they can keep their trade-in price for approximately a month. In turn, this will ensure that—if the iPhone 12 is announced imminently and their phone’s value suddenly drops—they still get the best price for their old handset ahead receiving their new one.

So, if you plan on joining the 41% of iPhone users planning to trade their old handset in, then you would be wise to act sooner rather than later. SellCell will compare 35+ prospective buyers and ensure that you get the best price for your smartphone, which you can then lock in for the next 30 days while you wait for the iPhone 12 to actually hit the shelves.

At SellCell we are in a unique position. As the US’s No 1 phone trade in price comparison site, we independently compare 35+ US buyback companies, so have access to the smartphone models consumers are trading in, how many of each model they trade, and to which companies they sell them to. We are well positioned to monitor smartphone trends & spikes.

Please see a handy infographic of the data.