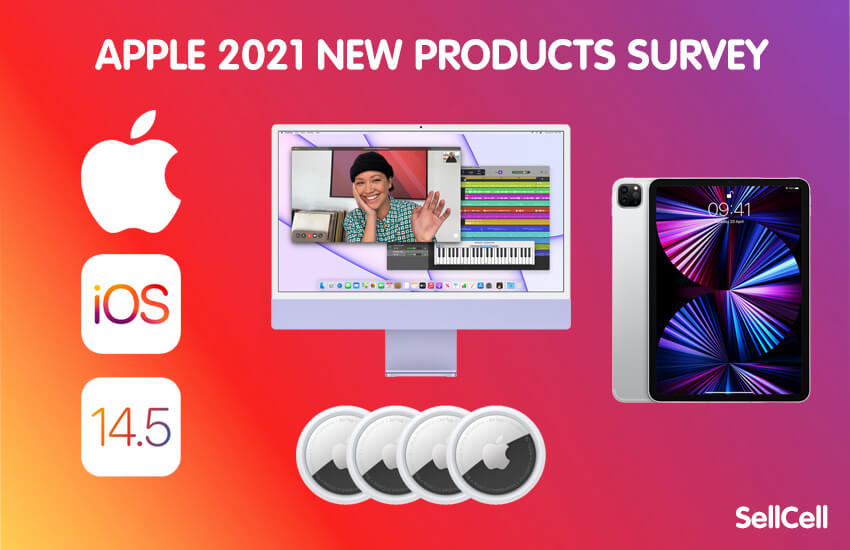 After months of rumors and leaks, Apple last month launched its first-ever item tracker called AirTag alongside a slew of refreshed lineups, including M1-powered iMac and iPad Pro models, a new Apple TV, and more.

While Apple performed relatively well compared to rivals in pandemic-hit 2020, this year is shaping up to be even better for the Cupertino giant as it records a massive 54% YoY revenue growth during its fiscal second quarter.

With a lot happening in the Apple space right now, we decided to survey iPhone & iPad users to gauge their opinion on everything from the iOS 14.5 update and new hardware releases to features they would like to see in the upcoming iPhone.

We asked iPhone and iPad users which new feature of the iOS/iPadOS 14.5 they like the best, and here are the results.

Next, we asked the same set of respondents whether they agree with Apple’s new stringent privacy policies, and we found out:

More than 60% of iPhone users intend to buy AirTags:

When asked what they like best about the recently released AirTags, the Apple users responded:

We decided to see whether AirTags will live up to its pre-launch hype and asked the same set of respondents whether they intend to purchase the tracker, and we found out:

We further asked for their opinion on the pricing of AirTags, which currently retail for $29 for one and $99 for a pack of four.

Unlike item trackers from Tile and Samsung, Apple’s AirTags don’t come with a hole or a hook to attach to your belongings.

And while there are plenty of accessories available for the device, it is worth noting that they don’t come in the box and will have to be purchased separately. When asked whether this is fair, our survey takers responded:

For AirTag to work, it sends out Bluetooth signals to nearby devices in the Find My network, including iPhones, iPads, Macs, and more. These devices then send the location of the lost AirTag to iCloud and enable the owner to track it through the ‘Find My’ app. While Apple promises that the whole process is anonymous and encrypted, we asked the survey respondents whether they feel secure with how the firm handles privacy with AirTags.

To the 61% of respondents that intend to buy an AirTag, we asked whether they are looking to buy them individually ($29) or as a bundle of four ($99).

To the same set of respondents who said ‘yes’ to buying AirTags, we asked what they would like to track using the device, and the responses – in order of the number of votes received – were:

(Note: Respondents were allowed to select up to three options.)

Not surprisingly keys topped the charts as the most popular thing to track. Seemingly people would really like the tags to track their pets & kids despite Apple advising against it. Conversely, Samsung’s Smart Tags can be used to track pets. Worryingly 7% would like to use AirTags to track partners activity, again Apple advise against this!

82% want to see the Face ID feature on future Macs:

Next, we asked a series of questions to gauge the interest of Apple users in the latest iMac featuring Apple’s powerful M1 chipset.

When asked whether they intend to buy the new 2021 iMac, the respondents answered:

“Existing MacBooks and iMacs, including the latest model, don’t have Apple’s Face ID facial recognition feature, but would you like to see it built into upcoming Mac computers?.” We asked this question to more than 3000 Apple users, and these were the answers:

Besides the standard silver, the new iMac is available in six other color variants, including Green, Yellow, Orange, Pink, Purple, and Blue. To 14% of respondents who intend to buy the iMac, we asked them to pick their preferred color option, and the responses – in order of the number of votes received – were:

A quarter of Apple users would buy the new iPad Pro with M1 chipset:

We asked the respondents if they would buy a 2021 iPad Pro model featuring M1 chipset and found out:

Touch ID and 120Hz display are among the most anticipated iPhone 13 features:

We then checked in with Apple users to find out what features they would like to see in the upcoming iPhone 13, and the responses – in order of the number of votes received – were:

“As Apple adds new features and new products to its ecosystem, would you ever consider switching away from Apple to Android?.” We asked this question to more than 3000 iPhone and iPad users, and the responses were:

With App Tracking Transparency topping the list of best features of iOS 14.5, it is clear that the controversial privacy feature has been well received by iOS and iPadOS users.

In fact, the survey also revealed that a whopping 73% agree with Apple’s new privacy policies, as opposed to 18% who don’t (an additional 9% aren’t sure what to make of it).

The survey shows that more than six in 10 (61%) respondents will consider buying an AirTag, indicating a strong demand for Apple’s new trackers among iPhone and iPad users.

Apple has integrated several security features into AirTags to avoid unwanted tracking, including ‘AirTag detected’ alerts and continuous beep sounds if it has been away from the paired device for a set period.

It may be a little too early to talk about the next iPhone, but as there has been plenty of exciting rumors and leaks of late, we decided to straight-up ask Apple users what they would like to see in the upcoming iPhones.

Touch ID, higher refresh rate displays (120Hz), and smaller notch / notch-less design are among the most anticipated features of the upcoming iPhone 13.

Surprisingly, only 0.8% of Apple users want to see an iPhone void of the lightning port (in favor of fully wireless charging), despite several rumors flying around about port-less models.

The rollout of privacy-centric features and the addition of new products to the ecosystem, such as AirTags, have helped boost the brand loyalty of Apple users, as the survey reveals 92.6% of existing Apple users would never consider switching away to Android.

SellCell’s March survey reported that 91.9% of iPhone users wouldn’t switch brands when they upgrade, and so the new data represents a 0.7% increase in brand loyalty among Apple users.

The motive of the survey was to gauge the opinion of Apple users on everything from the iOS 14.5 update and new hardware releases to features they would like to see in the upcoming iPhone.