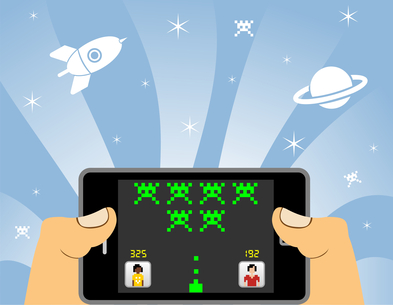 When you feel the need to answer an email, shoot off a text or browse the Internet, do you have the power of a computer in your pocket?

Odds suggest the answer is yes, as the United Nations released a report revealing that more persons on Earth have a cellular phone than they do a toilet. Mobiles allow you to play as well as work, and with billions of smart phones and tablets in circulation, the gaming industry has taken notice of the power of mobile. How has the evolution of video games changed thanks to the smart phone market?

Playing video games on screens the size of a deck of cards dates back to the 1990s, when programmable graphing calculators allowed bored mathematicians, engineers and students to play low-pixel retro games like Snake, Asteroids and Frogger. The Entertainment Society of America notes that these calculator games proved so popular that the first Nokia cell phone to launch with the Snake game program paved the way for over a quarter of a billion mobiles that offer the game as a standard feature today. More advanced games required better graphics and higher framerates, which did not come standard until the smart phone craze. What’s more, “dumb phones” restricted a person’s ability to purchase game programs, requiring them to physically purchase add-ons from a phone provider rather than hit a button and enjoy the app.

As video games have split across platforms, with users able to game on their television, computer, tablet or phone, demand for game development has split as well. More and more customers want mobile games they can play on a bus or lunch break, instead of on a 60-inch HDTV at home. Neilsen reports that games represent the most popular apps downloaded onto mobiles, beating out weather, social media and navigation apps. Flash games have increasingly become popular as customers can play them on a mobile without an app; games like Jewel Quest at iWin.com require no download and can be played free of cost. Free-to-play mobile games require only that a user sit through an ad, which can be disabled with a one-time fee.

How will the mobile market affect the video gaming industry? Even with the release of new video game consoles like Microsoft’s Xbox One, development for mobile platform gaming will spike. Juniper Research estimates that the number of paid game app downloads on mobiles will jump no less than tenfold, rising from the current $300 million marker to just under three billion dollars by 2016. The report notes that while each purchase amounts to only a few dollars (compared with a $70 Triple-A video game release), the vast number of mobile users creates a wider market despite the lower costs. Video game apps may not, furthermore, be video games themselves: popular gaming downloads like the Ghosts app for the Call of Duty franchise lets you monitor your gaming statistics, create character classes, upgrade weapons and communicate with friends and clan-mates.