There is more talk this week of a possible Apple iPad mini announcement that will be taking place sometime in October, after nothing was mentioned in the September conference when the iPhone 5 was announced.

What we will see with an iPad Mini?

Current speculation has it that the new device will have a 7.85in screen, scaling it down by a few inches from the new iPad which was launched earlier this year, in March.  To be honest I don’t think that the screen will have a retina display as that will be an expensive addition to a scaled down version that’s aiming to be cheaper to buy. After all, it has been set out to compete with Android tablets as well as the Amazon Kindle Fire HD (which was launched earlier this month).

It is also looking likely that the iPad mini may boast two speaker ports at the bottom of the device, with the new

Lightning connector socket in the middle (the connector that the iPhone 5 will be using, that isn’t compatible with older generations). 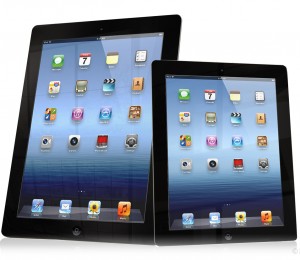 As of yet, this is just all good old speculation as we haven’t heard anything concrete from Apple about a mini version of their popular iPad. Still, it doesn’t stop rumors from circulating though does it?

Will you be investing in an iPad mini if one is released next month?