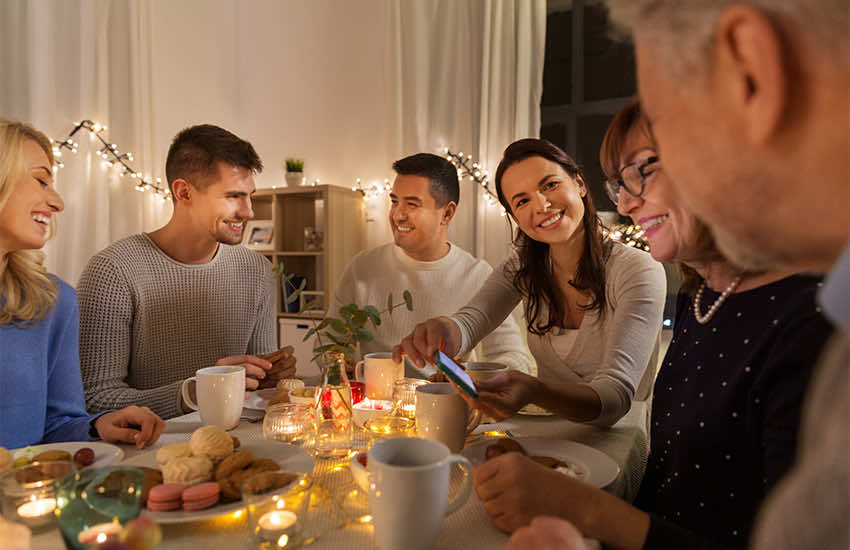 It is that time of the year when family and friends come together, share greetings, exchange gifts, and – most importantly – feast on the many home-cooked delicacies.

While the good old tradition is still being followed by most in the US during Thanksgiving and Christmas, our new survey suggests that the sense of togetherness and contentment these holidays used to bring is fading away with time thanks to the extensive integration of technology, especially smartphones, into our daily lives.

Smartphones and tablets are taking over even the most anticipated festivities of these sacred holidays – family dinners.

According to SellCell’s recent survey, three out of ten adults use either their smartphone or tablet at the dinner table during Christmas.

Things aren’t looking too rosy when it comes to Thanksgiving day as the survey reveals 27% of the US-based adults bring their gadgets to join Thanksgiving meals.

Family meals in restaurants are the worst, with as many as 61% admitting they stare at phone screens when they are dining out with family.

Besides this, the study also highlights that the usage of electronic devices during mealtimes has pretty much become a norm for around 25% of the families based in the United States.

What are phones or tablets being used for at the dinner table?

According to those who admitted to using tech at the table, 50% of them admit to using one or other social media applications instead of having meaningful conversations over dinner.

The next most popular handset activity — recorded at 42% — during mealtimes is watching videos online.

Again, not very surprising considering how easily one can get sucked into the YouTube vortex. Facebook’s video streaming platform, FB Watch, has also been doing pretty well in recent years, reportedly serving videos to more than 720 million users across the world every month.

37% of adults keep their phone or tablet handy when they’re eating to keep in touch with friends and relatives, while 28% say they are completing the last bits of work projects to meet deadlines.

Gaming on Android and iOS-based devices have become so much better in recent years, thanks to new powerful mobile chipsets and graphics-intensive games of the likes of PUBG and Fortnite.

Thus, it’s hardly surprising to note that 31.97% enjoy ‘multitasking’ between eating and gaming at mealtimes.

Meanwhile, 31.60% are consuming news content through their mobile devices during a meal of some sort.

Takeaways from the Survey

The report is based on a survey conducted in October 2019 involving 1210 adults, aged 18 years or higher, based in the US. The exact percentages for respondents’ genders are as follows: Female – 53%, Male – 46%. The motive of the survey was to get a percentage estimate of adults using a smartphone or a tablet at mealtimes, especially on special occasions like Christmas and Thanksgiving, and understand their device usage trends.

1.) DURING EVERYDAY FAMILY DINNERS DO FAMILY MEMBERS USE PHONES OR TABLETS AT THE TABLE?

2.) ARE FAMILY MEMBERS ALLOWED TO USE PHONES & TABLETS DURING SPECIAL OCCASION DINNERS?

3.) WHAT ARE PHONES OR TABLETS BEING USED FOR AT THE DINNER TABLE?

Download press kit for all data, graphs and images: