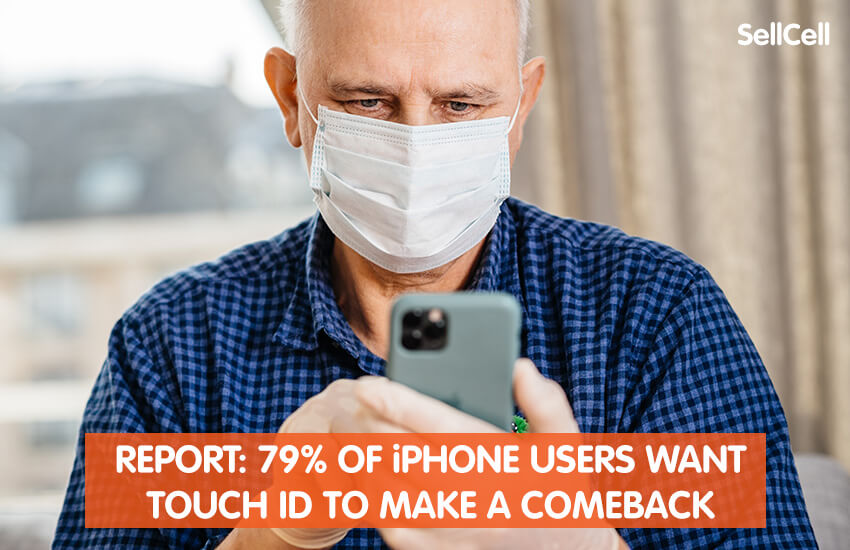 Since the outset of the ongoing COVID-19 pandemic, face masks have become an integral part of our everyday wardrobe to curb the further spread of infections.

Wearing face masks, however, has hindered the face recognition technology of newer iPhones, and users have been struggling to get their phones unlocked while in a public setting.

We decided to check in with iPhone users to understand how they are dealing with the situation, whether they would like to see Touch ID make a comeback, and more.

For this survey, we collected responses from more than 2000 US-based iPhone owners with an iPhone X or newer models.

Key takeaways from the survey:

A majority of iPhone users (74%) have had trouble with Face ID when wearing a mask:

“With face masks on, have you had trouble unlocking your iPhone or authorizing apps/payments in a public setting?”. We asked this question to more than 2000 iPhone users with an iPhone X or newer models, and here are the results:

As a follow-up question, we asked how frustrated they were that iPhone’s advanced face recognition feature won’t work with a mask on, and the following were the responses:

The universal use of face masks is among the top public health safety recommendations put forward by the Centers for Disease Control and Prevention (CDC) to fight the novel coronavirus.

According to the CDC, face masks, when properly worn, can immensely help reduce respiratory transmission of SARS-CoV-2, especially in light of a recent report that reveals half of the new infections are transmitted by people with no symptoms.

We asked the iPhone users whether they have ever removed or adjusted their face masks in public to make Face ID work, and the responses were:

While a permanent fix is out of the question until the pandemic is over, there are a few temporary workarounds to this Face ID situation.

Apple fairly quickly addressed the issue with the rollout of the iOS 13.5 update that switches to passcode mode directly when the Face ID recognizes the user is wearing a mask.

The update also lets the user skip Face ID and go to passcode mode just by swiping up from the bottom of the screen.

Alternatively, iPhone users can also make use of the ‘Set up an alternate appearance’ option to take a new Face ID scan with a mask on and improve the performance of the security feature.

We inquired the same set of respondents about their preferred temporary workaround, and here are the results:

We asked a series of related questions to understand the importance of fingerprint readers when it comes to making purchasing decisions during the pandemic, and here is what we found out:

From our research, it is clear that a majority of iPhone owners would like to see Touch ID make a comeback in some form in the future iPhones, with a majority (56.6%) rooting for the in-display fingerprint scanner technology.

The in-display fingerprint scanners have been a staple of Android counterparts for quite a while now, and it is disappointing that Apple hasn’t integrated the feature in the iPhone lineup thus far.

Besides that, the survey also indicates a potential drop in brand loyalty from 90.5% (from our research in 2019) to 76.7%, as 23.3% of iPhone users reveal they would switch to an Android phone with a fingerprint reader the next time they upgrade.

The report is based on an online survey – conducted between December 2-7, 2020 -involving more than 2000 iPhone phone users, aged 18 years or older, based in the United States.

The motive of the survey was to collect responses from iPhone users regarding the frustrations/ issues of Face ID while wearing masks, and also to ask whether they would like to see Touch ID make a comeback, and more.