It has been just a few days after Apple announced that they will be holding their event on 23rd October for the announcement of the much anticipated Apple iPad Mini, as well as a few other products that we might be treated to. Yesterday however, Google announced that they will be holding an event in New York on 29th October which will be centered around its Android mobile software with focus on the partnership with LG for the new Nexus (possibly).

Similar to Apple’s one liner, Google have a one-liner on the invitation which reads: “The playground is open”.

In terms of what will come out of this event, I have already mentioned the LG partnership, but we can also expect to hear about the new Nexus 7 with 32GB storage which will replace the 16GB at being the top model.

One of the major talking points of the Nexus 7 is that Google could also be dropping the 8GB version from it’s current price right down to $99! This would really shake up the 7 inch tablet industry and you can bet your bottom dollar that these will sell well if this comes into force. However, don’t get too excited just yet as this is still a rumor so you will need to wait until the end of the month for the hard facts. 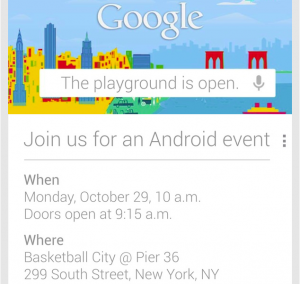