One in five people now use the file hosting service, Dropbox at work, and over 100 million people now use the cloud storage system worldwide. However, did you know that employees in your company that use the service could be breaching security policies?

For those of you who are unaware of what Dropbox is then it has only been around for a few years or so. Released in 2008, Dropbox helps make file sharing a lot easier by allowing you to create a folder on the computer that will be synchronized across any computers or mobile phones that have Dropbox installed, and logged in.

Let’s Look at the Stats

At the moment one out of five business users say that they use the sync and share service with confidential work documents not realizing that these files aren’t 100% secure from third parties.

I mean in my opinion, at this point the control aspect is lost, as IT departments cannot track files and documents that go beyond their reach like this. This ends up making life hard for these types of departments who are accountable for keeping company data as secure as it can be.

According to a recent survey it is in fact, the Marketing departments that are the main users of Dropbox with Engineering close behind, whilst Finance and Sales bring up the rear. 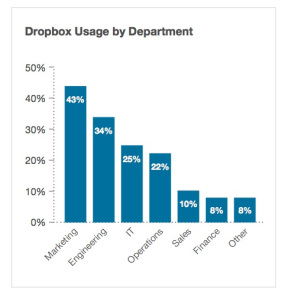 In terms of which tier of staff uses Dropbox then you may be astonished to know that Directors are the highest percentage of users, with C-Level slotting into second, and Staff and Management being the lowest users. 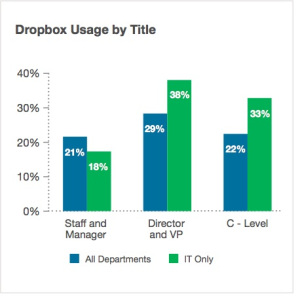 So Why Use Dropbox?

Dropbox has been designed in such a way that it’s not just easy to setup but even easier to use. If you are looking to take work home, or if you are on a long train journey, then Dropbox is the perfect solution.

The support and compatibility is a key factor, and the fact that you can also sync a file with the cloud is the icing on the cake. A lot of file sharing and syncing services do not offer support for mobile phones or even a cloud based syncing system so this clearly puts the Dropbox system to the top of the pile.