Just when things couldn’t get any worse for Apple shareholders, today they will have learned that the tech giants share price fell 6.6% in a day, taking them under the $400 mark. 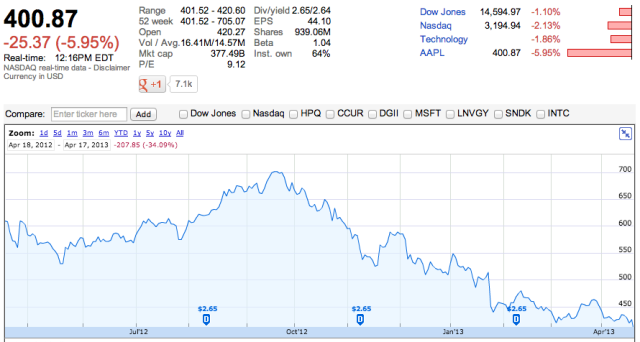 Now trading at $398.11 it represents a big downturn, and a 16-month low, and many investors are sorely disappointed in Apple shares since the iPhone 5 launch. The hay days of $700 shares are now just a distant memory I would imagine will stay that way.

Will another iPhone release solve the problem? Yes, I think it will.

However, I also think that they are running out of ideas on how to keep improving the cult phone, and with competition stronger than it has ever been before, they are battling to hold on..

Shares will notably climb during an iPhone 5S/6 launch, but the question is how high? I don’t know, but I wouldn’t expect it to rocket.