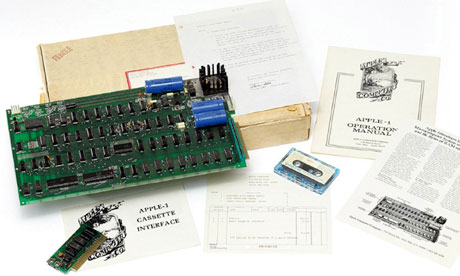 The Apple-1, for those that have a working model you could be sitting on a fortune. If you remember back to a few weeks ago we reported a story about a 1970s Apple-1 computer which failed to sell at a UK auction, since then one has sold in New York and made a massive $377,000.

However we can probably better that! This story has just come off the back of the iPad Mini unveiling a few mornings ago, that another Apple-1 is set to go to auction in Germany on November 24th.

The noticeable difference with this one is that the computer comes with all the original accessories which include a tape player and tapes that contain software.

If enough interest is drummed up, which I am sure there will be, then we could be looking at the most expensive Apple product in history – topping over the $400,000 mark.

Reports have come in noting that there are only six of these that are still in working order in the world, and as it’s the first ever Apple computer made the interest should be phenomenal.

A bit of insight: The Apple-1 was built and designed by hand back in the 1970’s by Steve Wozniak, and with a bit of help from a man by the name of Steve Jobs they sold 200 units of the Apple-1.

How much do you think this one will sell for?

Here is a video that we have found, of the Apple-1 in action: