Apple are in the news once again, but this time they aren’t trying sue anyone for copying them, instead they are the ones having to pay out for a copyright infringement.

Those who currently run the iOS 6 operating system which was launched in September inline with the iPhone 5 release will notice that there is a new clock design, and some may think “hold on just a second, that clock looks very familiar”. 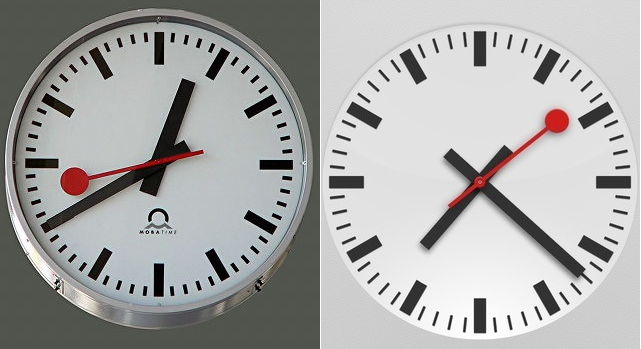 Familiar it most certainly is guys, as it has been reported that the clock design was taken from the Swiss National Railway, and I am sure that they will have been both flattered and happy that the likes of Apple had taken their design with iOS 6.

Now as Apple ‘lifted’ the design they have also agreed to pay up, and pay up they did, a massive $21 million in fact. The $21 million roughly works out at 10 cents, for each device that currently runs iOS 6.

Wow, Apple steal that clock design for iOS 6 then have to fork out £21m for the privilege. Should have asked first, I say.

Sure, Apple could have spent less than 21 million to simply design their own clock, but that’s not really the point, is it?

Apple paid $21M to SBB to use the clock-face design by Hans Hilfker. Can’t help but think I would’ve just changed the design in iOS 6.