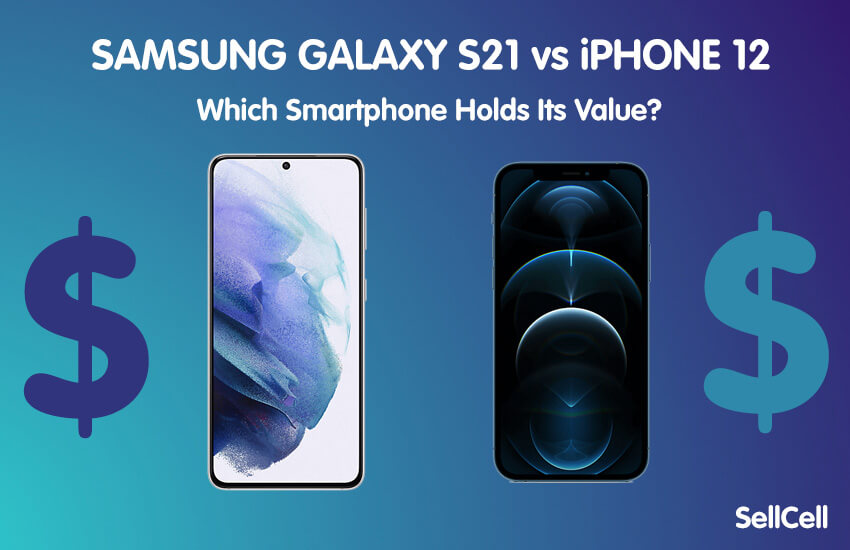 – Galaxy S21 5G 128GB is the main depreciator, losing over half of its value since launch

The value of smartphones naturally depreciates over time, but Samsung S21 owners have a shock in store when compared to the iPhone 12…

Like most material goods, smartphones depreciate in value from the moment they leave the factory. However, the value of some shrinks significantly faster than others. This means that consumers can find themselves with a handset that has little value, even after a short period of ownership.

The Samsung Galaxy S21 range is a case in point, particularly when compared to the iPhone 12 range. It is no secret that the two brands are constantly vying for position of “best-selling smartphone”, with Apple only recently knocking Samsung off its perch to take top spot.

However, is this number one position justified with depreciation in mind? Looking at the figures, probably. Samsung S21 owners should prepare themselves for some shocking news, despite the handsets only being on the shelves since the start of 2021.

We compared the depreciation in value of the entire Samsung Galaxy S21 range vs the entire Apple iPhone 12 range. This allows us to see which handset holds its value and which becomes worthless quicker. We measured each handset’s MSRP against its monthly and total depreciation (based on the good/used price of each handset on SellCell.com).

The figures shown in the table above will undoubtedly alarm Samsung Galaxy S21 owners across the entire range.

Despite only launching in January 2021, all handsets have lost almost 50% of their value. That is a substantial loss, considering they have only been on the market for three months at the time of writing.

Not only that, but compared to Apple’s iPhone 12 series, the S21 range costs more in a like-for-like comparison. Take Samsung’s most expensive handset as an example. It costs $1,379 (MSRP) and yet it has lost value at a startling $210.67 each month since launch. The iPhone equivalent has only depreciated by a few cents over $85 per month.

So, while you can still get $747 for an S21 in “good” condition (when sold via SellCell), you are losing a huge $632 compared to what you initially invested at the start of the year. Splendid news if you want to buy a cheaper S21, but terrible news if you want to sell up and replace your phone.

In short, if you grabbed a Samsung S21 at launch, it is now running at a serious loss, with no sign of its depreciation slowing down, irrespective of the model you own.

iPhone 12 owners, by comparison, have got it pretty good. While their handsets have also depreciated, value shrinkage has occurred at a much slower rate, and a significantly lower percentage. All this despite the iPhone 12 series having a two-month head start on launch.

However, it is Apple’s cheaper iPhone handsets that lose the most value. Looking at the iPhone 12 64 GB, we can see a loss of $269 in value since launch, a total of 33.7%, which equates to a monthly depreciation rate of 6.7%.

It is also impossible to ignore the iPhone 12 Mini range. These handsets launched a month later than the rest of the iPhone 12 smartphones, yet have seen the highest total depreciation over time than other iPhone 12s. All have lost around 32% of their original sale value, as a rate of around 8.2% per month.

So, depending on the iPhone you bought at launch, you’re either doing pretty well, with only around an 18% loss in value, or your handset is performing more like a Samsung, value-wise, with losses of up to 33%.

Why Do Samsung Phones Lose Value Faster Than iPhone?

The reasons for this disparity in value are likely to be many. Our recent brand loyalty survey could hold some answers, though, given that 92% of iPhone owners remain devoted to the Apple brand.

In this sense, we can say with some confidence that the reason the iPhone 12 series has held its value better than the Samsung Galaxy S21 series, is because the demand is still there even after that initial sale.

Apple owners looking to upgrade their device will, in the majority, stick to the Apple brand. In that sense, demand is high for pre-owned iPhone 12 handsets, meaning that they keep their value as consumers are happy to pay a premium, even for a refurbished or pre-owned iPhone 12.

On the other side, not only do Samsung owners show less loyalty to the brand, but 26% of them are happy to consider jumping ship to an Apple device once they’re done with their Android handset.

This has two effects. It decreases demand for Samsung’s handsets, driving the value down, while at the same time increasing Apple demand even further, slowing the rate of iPhone 12 value shrinkage.

Should You Sell Your iPhone 12 or Samsung Galaxy S21?

As you can see, Verizon and AT&T offer significantly lower prices than the highest price you can get for an iPhone 12 or Samsung Galaxy S21 model using SellCell. This means that if you opt for a carrier trade-in, the depreciation across both ranges would be considerably more, and customers would lose out even more.

Even the original manufacturer’s won’t give you the best value. Apple currently isn’t buying back iPhone 12 models.

Samsung does not offer a trade-in value for its own Galaxy S21 series but, confusingly, appears to be driving up the trade-in prices of the iPhone 12 by offering up to $700 for an unwanted iPhone 12 Max Pro 512 GB. This is an obvious attempt by Samsung to lure iPhone users into the Samsung Ecosystem.

Even then, you only get store credit with Samsung, not cash. So, checking out an independent valuation service like SellCell is useful in getting a good cash value for your phone.

Samsung Loses Out to Apple Again

So, Apple has dethroned Samsung for good reason. Given that Samsung has suffered in both brand loyalty and value retention, it is likely we will see Apple keeping its position as the most popular smartphone on the planet.

Given that smartphones lose their value so quickly, always ensure you are getting the best value for money if you decide to sell your handset. At SellCell, we can compare the sale value of a wide range of smartphones across multiple buyers to ensure you get the highest payout for your unwanted handset.

It doesn’t just stop at smartphones, either. You can use our website to compare prices across a wide range of tech devices, from consoles to smart watches, always ensuring you get the most value for money, whether you’re selling an iPhone 12, Samsung Galaxy S21, or otherwise.

We compared the MSRP of all iPhone 12 and Samsung Galaxy S21 smartphone models against their current value. We define “current value”, for this analysis, as the best price offered for each model, in “good” condition, on SellCell.com. We took both monthly and total depreciation as both a percentage of the MSRP and cash value and compared those figures to find out which handset, iPhone 12 or Samsung Galaxy S21, loses its value quickest.