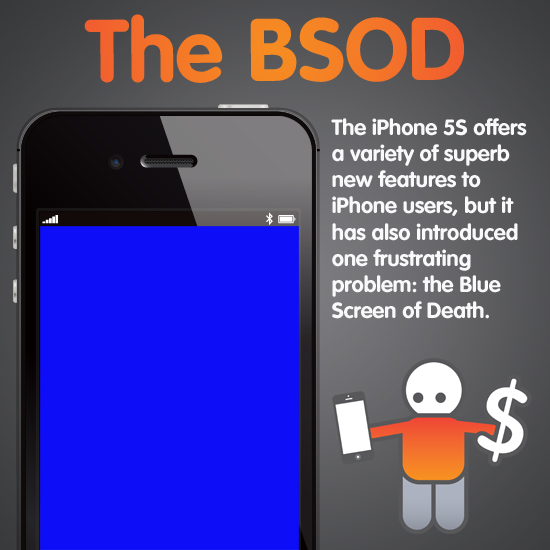 The iPhone 5S offers a variety of superb new features to iPhone users, but it has also introduced one frustrating problem: the Blue Screen of Death.

Named after its familiarity to an old Windows error message, the Blue Screen of Death may occur at seemingly random times when using specific iOS applications. During a BSOD error the screen of the iPhone 5S will suddenly turn a bright shade of blue. During this time the phone will be completely unresponsive.

How to Avoid the Blue Screen of Death

BSOD errors appear to occur more often when using the new iWork applications in iOS 7. Reports have shown that the BSOD error only seems to occur on the new iPhone 5S even though older iPhones have also been updated with the newest version of the operating system.

Users that are concerned about getting a BSOD error should avoid the iWork applications until they have been fixed, but this may not solve the problem entirely. Some users have reported issues with applications not related to iWork, such as YouTube and Safari. Multitasking appears to make the issue occur more often, so those that want to avoid a BSOD should close their unused applications regularly and should try to avoid switching between apps unless necessary.

How to Fix the Blue Screen of Death

A BSOD error usually fixes itself through a system reboot, but this isn’t always true. Some users have reported that their phone remained frozen even after the BSOD error had been resolved. If this occurs, a user should attempt to reset their phone by plugging it into their computer with their USB cord and using iTunes. Once iTunes has identified the phone, the user can back it up and then restore it, which should resolve the issues.

Unfortunately, if the phone is locked the user may not be able to unlock it while it is still frozen. If iTunes cannot properly identify the phone the user should take the phone to Apple for repairs. Most iPhones remain under Apple warranty for a year following their purchase.

While the Blue Screen of Death may initially seem alarming, it’s not usually harmful. Users that have important data on their phone should ensure that their phone is automatically backing up to the Apple cloud servers to avoid any permanent damage. Additionally, users that work on their phone may want to save their work more often to protect themselves from the possibility of losing their unsaved information.