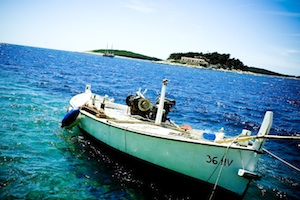 A French sailing star has been rescued from a potentially dangerous situation by her cell phone after she fell off her boat into the water during what was supposed to be a pee break.  Florence Arthaud, who won the Route de Rhum transatlantic sailing race single-handed 21 years ago back in 1990, was alone on her ten-metre boat when what was supposed to be a pee break went from embarrassing to dangerous when she fell overboard.  Arthaud, who had a cell phone on her at the time, was able to keep the device, which had a waterproof cover, above the water to avoid any possible damage and managed to call her mother for help.  Rescuers found her in Mediterranean waters close to the island of Corsica in the early hours of yesterday morning, thanks to both the GPS system on her cell phone and a handy headlamp.

Arthaud is an iconic figure in her native France, being often referred to as the “Little Fiancée of the Atlantic” and is one of the most respected sailors in the entire world.  Without her cell phone, her magnificent career could have potentially ended in what would have been a seriously unfortunate and ignominious manner.

The 54-year-old later admitted to BFM television that “I quite simply fell into the water while preparing to take a pee.”