The 21st century has seen a continued boom in technological advances, at a pace that most people are unable to keep up with. On only needs to look at the phones we used back in 2001 to understand how far we really have come. All of this wouldn’t be possible if it weren’t for the competition of two companies, Apple and Google. 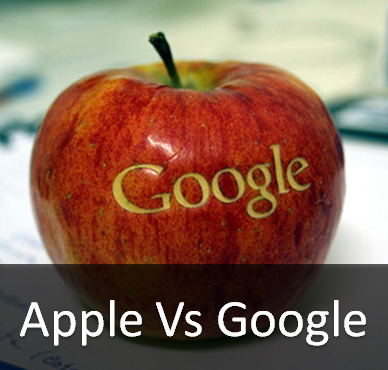 Throughout the 21st century these two giants in the technology industry have been at constant war for total supremacy. In one sense they have already achieved success as they are undisputedly the reigning industry leaders with the most influence on both people and companies alike. These accomplishments were spurred almost entirely by the advent of the modern smartphone.

You can tell just how big an impact the modern smart phone had for both the companies themselves as well as people with some believing that Apple itself was the sole inventor of the original smartphone with the iPhone.

The truth is much different though as the smartphone itself is not a 21st century creation, nor was it a concept created by Apple. In all actuality the smart phone concept was first conceptualized in the early 1970s, though it was first produced in 1994 by IBM. In other words neither Apple nor Google invented the smart phone wheel so to speak.

Even with such a revelation I don’t mean to speak ill regarding the advances either company has brought to market. Apple is a master of product aesthetics and marketing and with these two skills they propelled themselves to the top of the smart phone food chain by the mid to late 2000’s. On the other side of the fence is Google, a company that choose not to imitate Apples business model but instead implement their own radically different model.

So which of these two behemoths will reign supreme? Only time can answer that question, until then we can only make predictions.

Apple and Google have many things going in their favor but neither company can claim that they have an answer for everything. Indeed each one of these companies has their own flaws that are frequently exploited by one another. Let’s start with Apple and its positives and negatives, such as constant iOS updates for most of its entire phone line up, as well as their proprietary approach to the smart phone concept.

Apple has built a massive customer base that’s rabidly loyal and this loyalty is largely a product of an ultra-appealing minimalist product design and the largest app store available. All of this is enhanced by the fact that Apple is the sole producer of iPhones which allows for an incredibly cohesive experience to the end user. The benefits are frequently seen in the design and production of accessories for Apple products, which frequently outnumber Google phone accessories in many stores.

The result for the end user is a seamless ecosystem of products as well as constant OS updates that incorporate new features and it’s all the result of a vertically integrated company. This was all the vision of one of the greatest salesmen in American history, Steve Jobs. Steve Jobs was simply brilliant and he possessed the ability to make even a simple product launch an exciting ordeal.

Not only could he produce hype and excitement but he also was able to create a cult like culture of loyalist that would swear by his word.

The downsides of vertical integration are easy to see when closely examining Apple’s fight with Google. These weaknesses didn’t seem possible during Apple’s heyday, much alike Apple what happened to Apple during the late 80s all the way until the late 90s.

Essentially the closed off nature of Apple’s product design stifles important innovations, both in hardware and software. Apple doesn’t have an extensive product line with choices for everyone which is a really big problem for the company. Recent reports that have surfaced show some credibility in the prospect of a cheap iPhone that has been internally designated the iPhone 5C, though it has yet to be seen what its official name would be.

This is nothing short of Apple, at the very least, admitting that their product line needed change. Apple is also held back with its imposed software restrictions as well as censorship of applications within its app store. Users of Apple products are tied into Apple’s ecosystem without the ability to shop around unless you count downgrading as shopping around. Even Apple product accessories have glaring limitations; most of us have seen iPhone speaker docks that simply cannot work with anything but Apple products.

These issues have existed for years and eventually were going to slow down Apple’s growth as we have seen as early as 2010 when Google began gaining ground. With Steve Jobs passing and Tim Cook replacing him only relatively recently we have yet to see what changes will happen at Apple. The possibility of drastic changes is more than likely and also necessary, hopefully Tim Cook chooses to act as a real leader and make those changes.

Throughout the entire smartphone conflict Google has held firm to a belief that truly set it apart from every other mobile phone operating system maker, Open Source. Google’s commitment to Open Source meant that not only could developers develop applications at no charge, but manufactures could create phones and load Google’s Android OS at no costs. When looking at this business model from a business perspective it seems absurd, but that’s because they are only focused on the short term.

Even with lack of profits from OS licensing Google is still able to generate profit from each Android device sold as its Play Market comes loaded onto every device.

Google then takes a small portion of every sale as well as charging developers for hosting the applications on Google servers. This all has allowed Android to quickly take 80% global market share by 2013 even though it first launched in 2008, a year after the iPhone. This is because of an overwhelming amount of manufacture support from the likes of Samsung, LG, HTC, Lenovo, and Asus.

With these players and more Android is never devoid of healthy competition. This competition is a key driving factor for Android’s growth in the smartphone market, with a large selection of both high-end and low-end devices for people to choose from. Another benefit for Google’s fortunes lay in the highly customizable nature of its operating system.

Owners of Android phones don’t even need to unlock or root their device in order to customize almost every visual aspect within the operating system. This is in direct contrast to Apple devices which all sport the same generic and dated look.

Although Google has taken the global market almost entirely to itself, problems still remain. For one thing the profit margins for Android based handsets are far lower than the profit margin for its chief rival Apple. This is one of the key reasons Apple and Google are fairly even in terms of the total estimated cash value for each company. While some don’t see this as a particular issue many investors do.

Android also suffers from a major fragmentation problem as device manufacturers and carriers are slow to update device and more often than not they simply abandon products altogether. This issue has led to consumer outrage against certain companies, such as Motorola. Motorola was notorious for abandoning relatively recent devices thus leaving many consumers with old versions of Android when their phones were more than capable of installing the update.

All in all Android has its flaws but none so far has shown to be truly show stopping as the gravy train continues to roll on for Google.

Throughout all of the competition and frequent lawsuits only one winner has constantly found themselves victorious and that’s the consumer. The current mobile phone landscape allows users to truly find a phone that they find appealing as well as functional. This is mainly attributed to Google as opposed to Apple, as Apple is slow to make any fundamental changes.

Whereas with Google and Android one has a plethora of choices on things like color, screen size, internal memory, camera, and so on. Considering the growth rate of Android, it becomes clear to me and many others that Apple needs to make changes to its business model.

Until I see Apple make significant changes to its closed wall approach to the entire smartphone business model, I am going to have to predict that Android will remain the dominant mobile phone operating system for some time to come.

Today’s guest post was provided by Eduardo Dieguez, blogger for i-Adapters. Eduardo is a 1st generation American born Cuban that is currently in pursuit of his AA Degree.