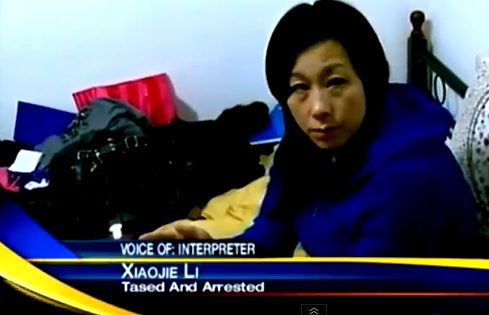 Xiaojie Li, a 44-year-old woman who lives in Newton, Massachusetts, was tasered by Police outside an Apple Store when she attempted to buy a number of iPhone’s and failed to comply with Police orders. She was carrying $16,000 in cash at the time, and was heard to say that she was buying these devices on behalf of her relatives living in China.

I don’t know whether you are aware of the Apple buying policy, but they have a strict two-phone-per-customer rule in force, and from all reports the woman in question, had purchased two phones from the same store a week previous to the event.

She then decided to make a return visit to the store just a week later, where staff advised her that she had reached her purchasing limit. However, Xiaojie Li was sure that other customers were buying more than two iPhone’s which resulted in her filming other customers on her phone to get evidence.

Obviously, and as you can imagine, this lead the manager of the store to ask her to leave the premises.

Was it a step too far from the police? well according to the Captain of the police department, Xiaojie Li resisted arrest and didn’t comply with a lawful order. The Captain went on to say that this was “not out of the ordinary”.

Video of the Tasering