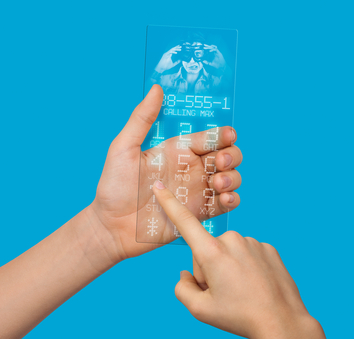 If you want to see the potential of retinal scan technology, check out the Tom Cruise sci-fi flick, “The Minority Report.” If you want a little taste of that now, you may only have to wait until April. That’s when Samsung’s new Galaxy S5 smartphone is expected to include a new eye-scanning feature that lets you unlock your phone.

The-next-best-thing technology wars among smartphone companies are heating up as Samsung’s retinal scan feature is a response to Apple’s iPhone 5S, which has a fingerprint scanner feature, according to Marketwatch. A smartphone user’s pupil, iris, eyelids and eyelashes are are scanned by the phone that produces a high-contrast photo that is translated into a complex code. That code is used to unlock the phone when the user scans his or her eye after that. The technology today isn’t far off from Cruise’s movie, where people’s iris’ are scanned everywhere they go that requires identification. Large video screens are seen in every public place in the movie, and feature commercials that speak directly to each person, as The Verge points out.

One other trend that’s already out on the consumer market is the phenomenon of smartphones-and-tablets-in-one, like the PadFone X and PadFone Mini, and smart watches. According to Information Week, and Smart Watch News, this trend has brought the wrist-wearing fashion back to life. Finally, smartphone technology has advanced enough that a smartphone user can utilize their phone without having to take their gloves off. Huawei’s Ascend Mate2 4G, which Information Week calls a “second-generation phablet”, features a screen sensitive enough to be glove-friendly. It comes with many other features, like two kinds of cameras, mini apps that hover above other apps, and a drive mode with a user-friendly interface. The Mate 2 is expected to reach the Western Hemisphere later this year. It will be compatible with AT&T and T-Mobile LTE networks.

Another feature that is driving-on-the-road-friendly is a program called Snapdragon Voice Activation, a hands-free feature that allows a smartphone user to take their phone out of sleep mode and connect to the system’s voice interface. As Digital Trends explains, with this program, there’s no need to have to physically push a button on your phone.

One exciting feature that is just around the corner, according to HongKiat.com, is the augmented reality app, which allows users to get information from their phone, and provide it in such a way that we see it like a photograph, or as we would in real life. With the camera on your phone, all you have to do is point it somewhere, and information about that area will overlay onto the scene on your phone, providing you with local restaurants, parks, or emergency facility listings. The app is yet to be available for smartphones because of their limitations for recognition accuracy of live views through the phone’s camera. More apps like these are expected to be made available on the market in the next few years.

Two other features you can expect to see soon are flexible screens and built-in projects. The Organic Light-Emitting Diode technology will allow a user to fold and unfold their smartphone screens, which is paper thin and can be viewed from the front and back of the screen. Samsung already had a projector-like feature built in to its Galaxy Beam smartphone, but new technology will allow a user to project a video up to 50 inches in size at 15 lumens, which will allow users to turn their smartphones into video game consoles. In fact, there will be no need for game controllers, as the technology is expected to be so advanced that you use your body and voice to play the games.