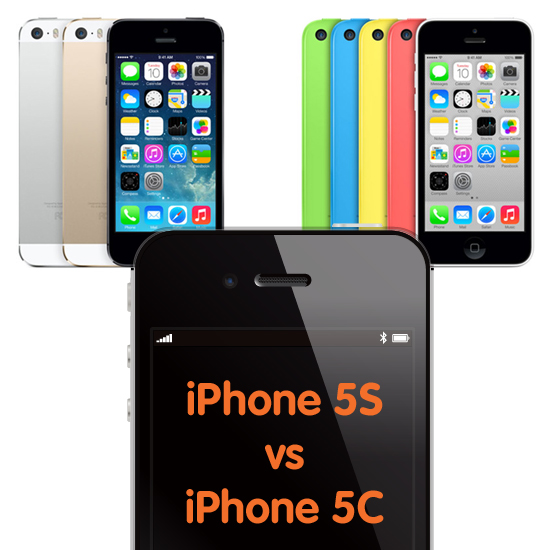 When Apple initiated its new fall phone rollout, the company surprised consumers everywhere by releasing two iPhones. Consumers were then faced with a choice: the iPhone 5S, with its fancy gold trim and A7 processor, or the iPhone 5C, which bills itself as the affordable iPhone.

One of the biggest differences between the two phones is cost. When a customer signs a new two-year contract, the iPhone 5C is $99, compared to $199 for the 5S. This $100 has many customers comparing features side-by-side to determine whether the more expensive model is really worth the extra money. But for many consumers, the 5C may be more than enough.

Here are a few major differences between the two phones to help customers decide.

Aesthetics aside, one major differentiating factor between the two phones is the processor. The iPhone 5C has an A6 processor, which is slightly faster than the iPhone 5’s A5 chip. The iPhone 5S has an A7 processor, with a speed that is unprecedented in an Apple smartphone. It’s important to note that in speed tests, the two phones have been found to be very similar in performance, so the difference will likely only be noticeable for consumers running high-end games.

Both phones feature an 8-megapixel camera, but the 5S includes a two-part LED flash that Apple says provides truer color tones and improved low-light photography. In picture tests, there were noticeable color improvements between photos taken by the 5S and 5C, especially in low-light conditions. The 5S also adds slow-motion video recording and automatic image stabilization.

For iPhone users who are tired of typing in a password every 30 seconds, the iPhone 5S’s fingerprint scanner is a definite plus. This model introduces the feature to Apple’s mobile devices, letting users unlock their phones by merely touching the home button. With the 5C, you’ll still be manually entering your password.

The new iPhone 5S’s M7 chip allows the phone to work as a fitness tracker without running the device’s battery down. Over time, this chip is expected to power much more sophisticated technology, including gesture control. Currently, if you’re a fan of apps that track your steps each day, the 5S may be worth the extra expense.

Both base models provide 16GB of storage, but the iPhone 5S extends to 64GB of storage for its most expensive model. With the 5C, consumers are limited to only 32GB on the high end. If you’re one of those users who fills up your iPhone with photos and apps, this may be a compelling reason to pay extra for the iPhone 5S. Be aware, however, that the 64GB model of the iPhone 5S starts at $399.99 under contract.

Available in black, silver, and gold, the iPhone 5S’s basic design is similar to the iPhone 5. Apple’s biggest accomplishment is that the company was able to increase the iPhone’s capabilities while still retaining its lightweight form factor. The iPhone 5C, on the other hand, provides a more fun, youth-oriented design that features colors in pastel shades of green, yellow, white, pink, and blue, with coordinating cases available in green, yellow, white, pink, blue, and black.

Aside from a slight bump in the processor and camera, the iPhone 5C is remarkably similar to the iPhone 5, which features a more sophisticated design for the same price. But for those consumers struggling to decide between an iPhone 5S and 5C, the choice will likely come down to what those consumers plan to do with the phone. For serious mobile gamers and photography enthusiasts, the 5S may very well be worth the extra $100.