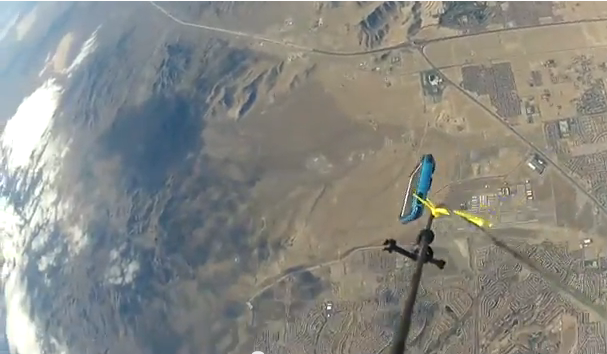 Move out of the way Felix Baumgartner, for I have spotted this video from G-Form on YouTube which shows Apple’s latest Smartphone, the Apple iPhone 5, being dropped from outside the Earth’s atmosphere in this spectacular video.

The video below shows an iPhone 5 that is sporting a G-Form protective case, which has then been attached to a balloon and sent up to a staggering 100,000 feet to the upper atmosphere of the Earth.

The balloon then bursts sending the iPhone plummeting back down to Earth where it falls near Area 51 in Nevada, completely free from any damage, and still working.

The team behind the drop as we have mentioned already, are G-Form who specialize in protective cases, one of which you can see in this video.

If you have already watched the video you will have probably noticed a few peculiar instances, which have also been picked up by some sceptics out there, who aren’t sure if this is real or not.

Comments such as “Hang on we didn’t see it, the actual drop?” and “Not really the curvature of the earth. Just a convex lens” have been seenm which has lead others to believe that this could just be a viral hoax to promote the companies range of iPhone protective cases.

What are your views on this video, is it real or fake?