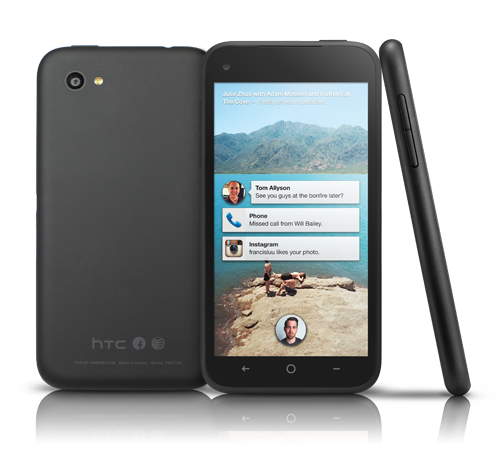 Two years ago, in 2011, the smartphone maker HTC released the HTC ChaCha – what was then known as the first Facebook phone. That budget smartphone had a dedicated Facebook button and Facebook’s app preloaded.

Many have believed for months now that Facebook could release its own phone to compete with Google and Apple. This hasn’t happened.

What Facebook has done is to release its own smartphone user interface overlay for Android phones. This isn’t just an Android app. Instead, it is a new launcher and a suite of apps. The Facebook interface that Facebook Home offers acts as a home screen that sits on top of the traditional Android home screen.

With the First phone, HTC is again first to market with a new Facebook possibility.

People who try the HTC First often go in fearing that it could be a bad idea. To begin, they wonder about what it could be like to have Facebook in front of everything else on a phone. They also worry that the Facebook Home launcher screen could somehow alter the very Android operating system it runs on.

Once they get the hang of it, though, many users report satisfaction with how effective the Facebook Home launcher screen is in keeping them in touch on Facebook. As for the concern that Facebook Home is an OS fork (an installation that reprograms the very OS it is installed on), they needn’t worry. Launchers and apps are routine and don’t reprogram operating systems (the Google Play Store is full of launchers). Underneath Facebook Home, the regular Android experience is intact.

If you like to be productive on Facebook, putting in as many Likes and comments in the shortest amount of time as possible, you will like Facebook Home. It gives you nearly the full Facebook experience – Likes, comments and all – right on the home screen (or the Cover Feed, as they call it). Every status update from your contacts appears with the contact photo next to it. If a user happens to just have uploaded new images to their account, though, those are what you see. Unfortunately, Cover Feed offers no video previews at this time.

The Facebook Home user interface is thoughtfully done. As an example, when you zoom in on images, they automatically start a gentle scroll. You can casually Like any image you want without even stopping the motion. Convenience like this can make people a lot more productive on Facebook.

When you turn on the phone for the first time, it asks you for two sets of credentials – one for your Google account and another for your Facebook account. As soon as you supply the information needed, your Cover Feed comes on.

To begin, your Facebook home screen is just a gentle parade of your friends’ cover images and any new photos they may have posted. You also have your own Facebook profile picture in a little bubble at the bottom of the screen. The top of the screen displays recent Facebook updates and the bottom left gives you the options you need to Like something or to comment.

The middle of the screen holds several notification cards. All your most recent Facebook activity – what others have said about your posts, among other things, appears here. If you don’t want a particular kind of notification, you can use a quick swipe to get rid of them. It can be a satisfying experience to be able to do all this on Facebook when your phone is still locked.

Facebook Home allows you to do a great deal. To see the app launcher, for instance, you just need to drag your profile picture up the screen. Here, you get options that let you add pictures to your Facebook account or create status updates.

The Facebook Home screen is designed to be accessible even when the phone is locked. This would be okay, except for the fact that the Like and comment buttons are always active, too. A mere double tap gets them going. They are easy to accidentally activate. Adding a PIN to the lock screen doesn’t help – it doesn’t lock the comment and Like buttons.

There’s another possible problem that goes with using Facebook Home – it constantly downloads data from Facebook to keep your Cover Feed updated. If you are on a limited mobile Internet plan, you could quickly run through your data allowance. As a partial solution, Facebook allows you to lower the quality of the images downloaded to help with this problem.

Facebook Home is an irresistible experience. To always have live comments from your friends scrolling up a screen can be very difficult to drag your eyes away from. The notification cards that show your Twitter and Gmail activity can make it even better. It’s a world of social activity in a very attractive package.

The HTC First phone underneath Facebook Home is well-built and offers a seamless experience, too. Its 5 megapixel camera will allow you to take quality pictures and the sharp 4.3 inch Super LCD screen can display images and text crisply. For a first try, this is a product that certainly works.