Our survey certainly shows that the majority of people can go no longer than a few hours before the urge to check their phone for Facebook, Twitter, Email, or Text messages.

When you think of how important a cell phone is today, you just couldn’t live without it right? It was a different story about 10 years ago when all you could do with a phone was play snake, send a few texts and make some expensive calls.

Technology has come on in leaps and bounds in just that 10 year period, and now a phone is used for apps, games, checking email, checking social media networks and so much more.

That is why we wanted to see how long people could go without a phone in their lives.

The other two options were 1 week and 1 hour, which both received a significant amount of votes less, than the two mentioned in the paragraph above.

This goes to show that in today’s society a cell phone is much more than it used to be. It now signifies its importance as a must have gadget that people just can’t live without. 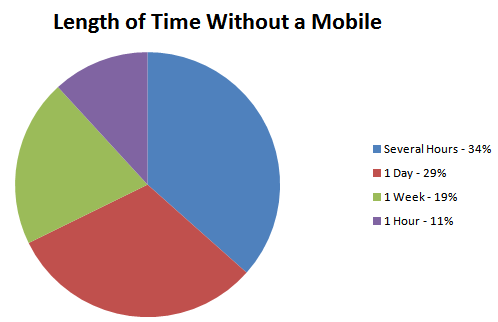