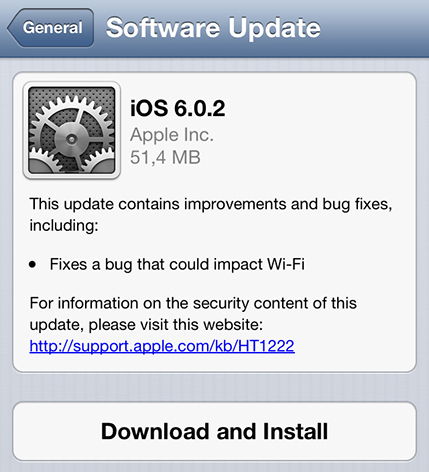 I know some of you still haven’t taken the plunge from iOS 5 to iOS 6 yet, due to the Apple Maps complications, but i’m here to now tell you that Apple have now released iOS 6.02 for those with an iPhone 5 or iPad Mini, which looks at resolving some bugs that were present in iOS 6.

The update itself is small, so don’t expect too many major changes with this one but the benefit it it only takes 20 minutes to install. It mainly addresses the Wi-Fi bug that haunted a lot of users who experienced limited range and poor download/upload speeds.

It also focuses on a few other bugs, but to be honest, reading the release notes doesn’t give much away in terms of further information.

Can I Update Now?

There are a number of ways that you can update, there is the iTunes route, OTA (Over the Air), or you can download them directly using the links below.

ALSO: Apple are currently in the midst of testing iOS 6.1 with developers, which started yesterday.